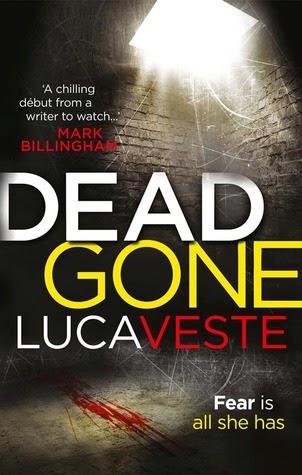 Back Cover Blurb: "The young girl you have found isn’t the first experiment I’ve carried out. She won’t be the last". A tense, unpredictable crime debut that will not only have you gripped, but will chill you to the bone. Perfect for fans of Stuart MacBride and Mark Billingham. A serial killer is stalking the streets of Liverpool, gruesomely murdering victims as part of a series of infamous, unethical and deadly psychological experiments. When it becomes apparent that each victim has ties to the City of Liverpool University, DI David Murphy and DS Laura Rossi realise they're chasing a killer unlike any they've hunted before – one who doesn’t just want his victims’ bodies, but wants their minds too. With a series of psychological twists Dead Gone will keep you guessing until the very end.


"Throughout history, man has attempted to understand the complexities of life. Why are we here? What is our purpose? I am attempting to prove my answer to those questions. We are only here to die".

Dead Gone had me hooked right from the opening quote. A debut crime novel exploring the horrors created by the psychological experiments carried out by a serial killer, it is intense and gripping from the off.

We meet the main protagonist DI David Murphy and his colleague DS Laura Rossi in the first few chapters when the body of a young girl is discovered in mysterious circumstances in a local park. Almost immediately we realise that this is no ordinary murder, for it is accompanied by a letter from the killer explaining that the victim is an 'experiment', a murder of a very different kind from anything the detectives have encountered before.

As they investigate further, another body is discovered, with another note and it soon becomes apparent that there is a serial killer on the loose in Liverpool. The detectives work hard and fast to try and stop the killer before he strikes again, but DI Murphy has his own demons to battle with which threaten to hinder the investigation.

His colleagues are divided, some of them almost waiting for him to have a mental break down or screw the investigation up, whilst others like DS Rossi are consistently supportive. They are an unlikely but likeable pair, and I found myself drawn to them and willing them to succeed. That's not to say it will be easy for them.

Dead Gone had me second guessing right until the very end. Every time I thought I had worked out 'who dunnit' or what might happen next, I was proven wrong. I find that's a rare thing in crime novels these days, and I am glad that I have discovered a writer who can keep me hooked (and guessing) all the way through.

Dark, disturbing and extremely well written, Dead Gone is a debut novel that I won't be forgetting in a hurry.

You can purchase Dead Gone from Amazon and all good book shops.