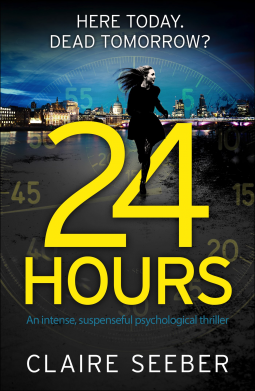 24 Hours by Claire Seeber
Publisher: Bookouture
Release date: 9 October 2015
Rating: *****
Back cover blurb:  Here today. Dead tomorrow? My best friend, Emily, is dead – killed last night in a hotel fire. But it was meant to be me. Now I have 24 hours to find my daughter. Before he finds out I’m still alive. 24 Hours is a fast-paced, intelligent psychological thriller that will leave you breathless.


24 Hours is a novel covering the 24 Hour period that follows a devastating hotel fire, in which Laurie Smith's best friend Emily died. Laurie is certain though that Emily wasn't meant to die, and instead that someone is after her.

Laurie's life has been traumatic of late, so there are no shortage of suspects in Laurie's mind of people wanting to cause her harm. But she doesn't really care about herself. What she cares most about in the world, is her daughter, Polly.

Polly is supposedly safe, on her way back from Disneyland Paris with her Grandma, but as their time to return to the UK draws nearer, Laurie fears for her daughter's life and must do everything in her power to stop the person who she believes is responsible for the hotel fire, before they harm her daughter.

But is Laurie's life really in danger? Or have the last few traumatic months in her life made her delusional?

A love/hate relationship with an turner prize winning ex-husband, and his jealous new girlfriend, an on/off lover who you don't know if you can trust, and his crazy ex-wife, all good reasons why any sane person would go a little mad when having to deal with.

Told in alternating chapters; 'now', each hour in the 24 hours after the fire, and 'then', before the fire. 24 Hours is a fast paced psychological thriller that will genuinely have you second guessing each and every character.

It's conclusion is ultimately satisfying, and it's a novel I won't be forgetting in a hurry.

24 Hours is available to buy now from Amazon online.