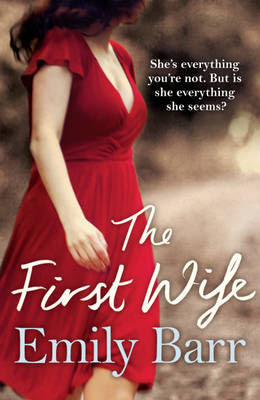 The First Wife by Emily Barr
Publisher: Headline Review
Release Date: 15 September 2011
Rating: ****
The back cover blurb:
His first wife was everything you're not. But was she everything she seemed?

Lily, a young woman left alone in the world on the death of her grandparents, finds purpose when she befriends Harry Summers, a grieving widower, whose wife Sarah recently took her own life in Barcelona. The pair fall in love and Lily finally finds the security she has never had. But Lily's life takes a darker turn when she realises there may be more to Sarah's death than meets the eye. Anxious to find the truth before she marries her beloved Harry, Lily sets off to Barcelona in search of answers. What she discovers is more shocking than she could ever have imagined...

First things first, I think this is a great novel, however the reason I've given it four out of five stars is due to general pace of the novel. I really struggled through the beginning of it, and almost gave up on it. I'm glad I didn't however because it does progress into a really interesting story.

The First Wife centres on Lily, a very naive young girl who finds herself down and out after the death of her grandparents whom she was caring for and had led a very sheltered life with. She is forced to move in with a family she doesn't know and to find herself a job, in a world which she knows nothing about.

To cut a long story short (literally) she ends up cleaning for local celebrity Harry Summers and his wife Sarah. She admires Harry from afar, which borders on infatuation but despite her naivety is astute enough to know that nothing will happen between them.

Lily of all people knows that life doesn't turn out how we plan, and when Sarah takes her own life on a trip to Barcelona, Lily finds herself growing ever closer to the grieving widow and ever resentful of his 'dead' wife, particularly when their relationship moves up a gear.

I love the emphasis throughout the novel that Harry's first wife Sarah is the 'problem' shall we say, even the back cover blurb would lead you into believing this, however there is a twist in the final parts of the story that I didn't see coming, and I think it is worth reading for this alone.

I don't really want to give any more of the story away, so if you think you can manage the slow start then I would definitely recommend it.