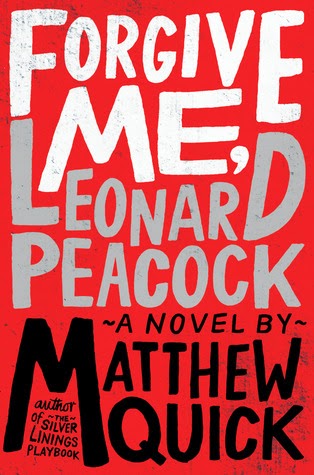 Forgive Me, Leonard Peacock by Matthew QuickPublisher: Headline
Release Date: 16 January 2014 (paperback)
Rating: ***and a half

Back Cover Blurb:
'The key is doing something that sets you apart forever in the minds of regular people.
Something that matters'.

I've been wanting to read this book for what feels like an absolute age. I've seen so many people mentioning it on Twitter, Amazon etc. So I was thrilled to receive it as my first Net Galley approved request.

It's a highly originally and very honest novel, told from the viewpoint of Leonard Peacock on the day of his 18th Birthday. It is unlike anything I have read before.
Disturbing in places and very gritty, it lets us in to the mind of a teenage boy who is in deep deep despair, on the verge of suicide. His relationship with his mother is practically non existent, he adores his elderly next door neighbour (one of the only real friends he has, aside from his German teacher Herr Silverman) and he no longer speaks to his former best friend Asher and hates him to the point where he wants to kill him - literally.
The novel is told entirely in the first person from Leonard's point of view and has foot notes and 'Letters from the future'. It's almost as if he is keeping a diary, or writing his memoirs. I found it a little confusing and distracting at first, but soon got used to it, and quite enjoyed the wit in some of the foot notes.

At first glance it would be easy to dismiss Leonard as a typical teenage boy, but delve a little deeper and you will learn that he is very intelligent, not only academically, but also in the way he views those around him. He has been badly neglected by both of his parents and this goes a little way to explain Leonard's depression, but it is not the only side to the story. Asher plays a huge part.

I don't want to give too much away, but I found it impossible to feel anything but sympathy for Leonard and the way that he's been treated in the past. My only gripe with the novel was the ending, I found it a little abrupt and couldn't help but wonder what exactly does happen next.... I'd like to see personally if any of the 'Letters from the future' become reality.

Although uncomfortable reading at times (purely down to the subject matter) Forgive Me, Leonard Peacock is one book that I won't forget in a hurry!

You can purchase Forgive Me, Leonard Peacock from Amazon online and all good bookshops.