Review: After the Bombing by Clare Morrall 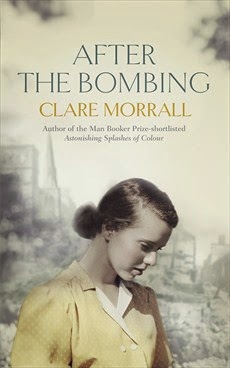 After the Bombing by Clare Morrall
Publisher: Sceptre
Release Date: 27 March 2014
Rating: ***
Back cover blurb: On the night of May 3rd, 1942, fifteen-year-old Alma Braithwaite and her fellow boarders at Goldwyn's school huddle in an air-raid shelter as bombs rain down on Exeter in one of the Baedeker raids. By the time the girls emerge, half the school is in ruins and the city centre has been destroyed. Twenty-one years on, Alma lives alone in the family house and teaches music at her old school. She's moderately content, until the death of the long-serving headmistress brings a new broom in the form of the steely, modernizing Miss Yates. A new student starts too - the daughter of a man Alma hasn't seen since 1942, when he played a pivotal role in her life. Suddenly, Alma is taken back to the summer that followed the raids, a summer of numbing loss yet also of youthful exuberance, friendship and dancing.

I expected to love this book, but I was left a little disappointed by the ending. I'm not sure exactly what I was expecting, but I feel it leaves a few things unanswered. Maybe there's a sequel in the pipeline that I don't know about. Or maybe ''After the Bombing'' just has 'one of those endings'?

'After the Bombing' opens with a descriptive prologue about the RAF bombing Lübeck in Germany and the trail of devastation left in the bomber's wake. The chapter closes detailing Hitler's plans for retaliation, devastation over the cities of Exeter, Bath, Norwich, York and Canterbury.

Exeter is where we first meet our protagonist, Alma Braithwaite a fifteen year old boarder at Goldwyn's school for Girls, woken during the night by her best friend Curls (Jane Curley) amidst Hitler's retaliation bombings.

The girls make it safely to the schools newly built Air raid shelter where the spend the rest of the night. When they awake, it is to the death and destruction of some of the worst bombing of WWII and for some, their lives are changed forever.

Twenty One Years later, Alma is still at Goldwyn's, this time as a teacher, rather than a naive schoolgirl. Her quiet and calm existence is disturbed by the arrival of a new headmistress and a new pupil, the daughter of a face from her past that she can't forget. Alma, certain she had moved on, is forced to relive her teenage years and the losses that she and her friends suffered.

'After the Bombing' as a fictional historic account of World World Two is a great novel, as 'just' a novel, I'm not sure I'd have read to the end.