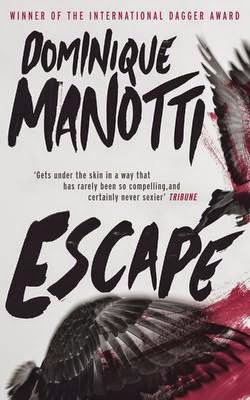 Escape by Dominique Maniotti
Publisher: Arcadia Books
Release date: 15 July 2014
Rating: *** and a half
Back cover blurb: 1987. Two Italian prisoners escape prison in a rubbish lorry. Parting company, Carlo heads for Milan, while Filippo treks north over the mountains. When Carlo is killed in a shoot-out during a bank robbery – and under deeply suspicious circumstances – a massive manhunt is launched. Frightened for his own safety, Filippo flees to Paris, where he’s assisted by Italian political exiles and finds work as a security guard. Long, lonely hours lead him to recall a story told to him by Carlo in prison – the explosive account of a former leader of the Red Brigades – and Filippo begins to devote his evenings to writing it down. His landlady, Cristina, finds him a publisher and the book becomes an instant bestseller. Carefully coached by his publishers, Filippo steadfastly refuses to admit that the book is anything other than fiction, but the public don’t believe him. Nor do the police. Contd...

Escape is a novel that I would not necessarily have picked up myself, despite it being within the crime genre I love, purely because it has been translated from the French version. Now I'm not saying there's anything wrong with translated novels (I have read a few crackers!) but for some reason I don't always get on that well with the French ones. Maybe it's delayed guilt at being so awful at A Level French?!

However, I was very kindly sent Escape by Arcadia Books a while back, and finally got around to reading it, and I must say I was pleasantly surprised. It's not my favourite crime novel ever, but for such a small book (160 pages) it packs an awful lot in.

Escape opens with the (somewhat predictable) escape of the title. Two Italian prisoners escape their prison in a refuse lorry. Although Carlo's escape is planned, Fillipo is more spur of the moment as he realises that he could be left behind to fend for himself.

Fillipo doesn't want to be left behind and makes a snap decision to follow in Carlo's footsteps.The escape is not as simple as Fillipo imagined and he is left to fend for himself after all when Carlo says that they must part company. Scared and alone, Fillipo has no choice but to follow Carlo's instructions and heads north over the mountains.

Meanwhile Carlo is on his way to Milan, his parting words to Fillipo are to head to Paris if he should get into trouble and look up an old friend of Carlo's who will be able to help. Fillipo barely takes notice of his friends advice as he convinced he will not need it. But when Carlo is shot in a bank robbery, Fillipo without an alibi realises he needs all the friends he can get.

He flees to Paris where he expects to be greeted like an old friend at the mention of Carlo's name, but is sorely disappointed. Finding himself alone again with no friends to speak of, Fillipo begins to write, he insists the novel he produces is fiction, but those around him are not so sure.

As Fillipo's plot develops he finds himself under increasing scrutiny. Will anyone believe a word he has to say, or has he got himself in to deep? Well, you will have to read to find out, as I refuse to give any more away :)


Escape is available to buy now from Amazon online and all good book shops.

Thanks to Arcadia who sent me a proof copy of this novel in exchange for an honest review.