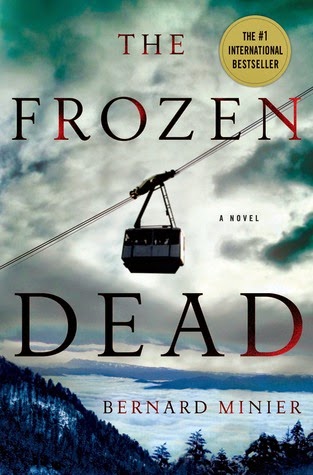 The Frozen Dead by Bernard Minier
Publisher: St Martins Press
Release date: 12 August 2014
Rating: ****
Back cover blurb: The first victim is a horse: its headless, flayed body hangs suspended from the edge of a frozen cliff. On the same day as the gruesome discovery takes place, Diane Berg, a young psychiatrist starts her first job at a high security asylum for the criminally insane, just a few miles away. She is baffled by the slightly unorthodox methods the asylums's director uses, and then greatly alarmed when she realizes that drugs are disappearing from within the fortified institution while someone seems to be slipping out at night. Commandant Martin Servaz, a charismatic, Toulouse city cop fond of quoting Latin, can’t believe he has been called out over the death of an animal. But there is something disturbing about this crime that he cannot ignore. Then DNA from one of the most notorious inmates of the asylum.... contd.

The Frozen Dead is a brilliantly atmospheric novel with an original setting, characters and plot line.

Starting your novel with a brutally murdered horse is a risky move for any crime writer, but Minier writes well enough to keep you intrigued even though you are thinking in the back of your mind, why the hell is a crime novel starting with the cops investigating a horse's murder?

But the horse is just the beginning.

For the murdered animal belongs to one of the wealthiest and most powerful residents in the local community. A man who is not without enemies.

Could his beloved horses murder be an act of revenge?

If so, what exactly is he guilty of?

Or is the death of the animal just the first part of a long and dangerous game being played with the Police?

Obviously you will have to read to find out, but you will be gripped and left wanting more.

The Frozen Dead is available to buy from Amazon online and all good book shops.

Thanks to the publishers who approved my request via netgalley in exchange for an honest review.