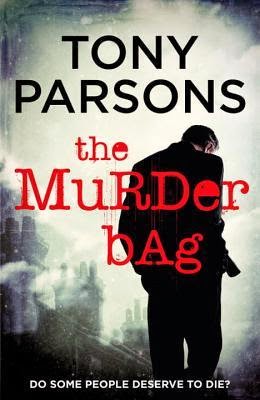 The Murder Bag by Tony Parsons
Publisher: Century
Release date: 8 May 2014
Rating: ****
Back cover blurb: Twenty years ago seven rich, privileged students became friends at their exclusive private school, Potter’s Field. Now they have started dying in the most violent way imaginable. Detective Max Wolfe has recently arrived in the Homicide division of London’s West End Central, 27 Savile Row. Soon he is following the bloody trail from the backstreets and bright lights of the city, to the darkest corners of the internet and all the way to the corridors of power. As the bodies pile up, Max finds the killer’s reach getting closer to everything - and everyone - he loves. Soon he is fighting not only for justice, but for his own life ...
The Murder Bag is an unpredictable crime thriller novel, combining historic crimes with those of the present day.

When an ex Potters Fields school boy who is now a successful business man, is brutally murdered Detective Max Wolfe is one of the first on the scene.

Twenty years previously a group of seven privileged teenagers at Potters Fields undertook an act which most of them would rather forget, and as they begin to be brutally murdered one by one, it is clear that someone is set on revenge and justice and will stop at nothing to obtain this.

Max Wolfe is new to the 'murder' squad, but he is an experienced policeman with a wealth of knowledge and a steely determination to uncover the truth and pin down the suspect, no matter what the cost. He has little thought for his own safety which can sometimes have disastrous consequences, but this only makes him more likeable.

For me personally, The Murder Bag has something that most crime novels don't, honest relationships and an honest portrayal of a detective who is not afraid to take risks.

Too often crime novels idolise the investigative detectives, but Max Wolfe is real, with a daughter and a dog that he loves and a knack of being in the wrong place at the wrong time!

If you enjoy a good crime novel with a bit of a different plot, and with a 'different' detective, then The Murder Bag should definitely be on your 'list'!


The Murder Bag is available now from Amazon online and all good book shops.