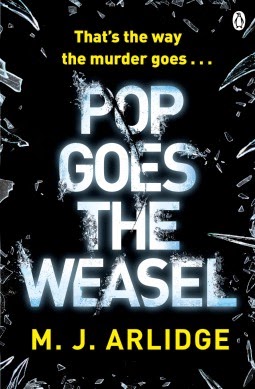 Pop Goes The Weasel by M.J. Arlidge
Publisher: Penguin
Release date: 11 September 2014
Rating: *****
Back cover blurb: DI Helen Grace returns in Pop Goes the Weasel, the electrifying new thriller from M. J. Arlidge. The body of a middle-aged man is discovered in Southampton's red-light district - horrifically mutilated, with his heart removed. Hours later - and barely cold - the heart arrives with his wife and children by courier. A pattern emerges when another male victim is found dead and eviscerated, his heart delivered soon afterwards. The media call it Jack the Ripper in reverse; revenge against the men who lead sordid double lives visiting prostitutes. For Grace, only one thing is certain: there's a vicious serial-killer at large who must be halted at all costs . . .

Pop Goes The Weasel is the first novel by author M.J. Arlidge that I have had the pleasure of reading. I enjoyed it so much that I immediately went and bought the previous book in the series 'Eeny Meeny' to read on my forthcoming holiday.

All the way the novel I was thinking how well written it was, and how it would make a great crime drama on TV. I had no idea at the time that the author had previously worked for ITV and had been involved in the production of crime drama.

D.I. Helen Grace our main protagonist is a brilliant but flawed character. Pop Goes The Weasel sees her thrown in at the deep end after a period of extended leave following a traumatic event in her past, but she is determined to leave the past behind her and concentrate on the task in hand.

It's a gruesome one.

A man is found dead with his heart missing in a known prostitution area. He is a devoted family man, religious, so when his heart turns up on the doorstep of his family home it sends shock waves through the police community. What kind of killer are they dealing with. A sadistic one off, or a much more disturbing serial killer.

As more men are murdered and dismembered it becomes clear that they are dealing with someone brutal. But what is their motive and why are they targeting married men who chose to visit prostitutes?

Helen thinks the answer is under their noses, but her colleagues are not all trusting of her abilities, and crucial facts are overlooked. As it becomes clear that her superior wants her off the case at all costs, Helen is determined not to let her win and prove that once and for all in, she is in the job she loves because she has talent.
Pop Goes The Weasel is available to pre-order now from Amazon online.