Review: If I Knew You Were Going To Be This Beautiful, I Never Would Have Let You Go by Judy Chicurel 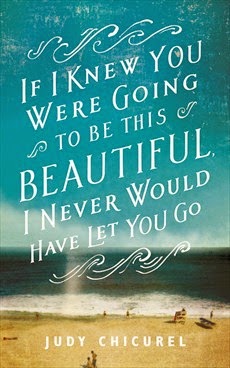 If I Knew You Were Going To Be This Beautiful, I Never Would Have Let You Go by Judy Chicurel
Publisher: Tinder Press
Release date: 30 October 2014
Rating: ****
Back cover blurb: Katie and her young friends face a changing world, with prospects very different from those presented to their parents. The Vietnam War seems pointless to many but has devastated lives that remain broken even after the fighting is over. As, with bitter-sweet humour, the characters' experiences unfold, daily events mirror bigger issues: an illegal abortion is plotted; the town is sinking into an economic abyss forcing Katie's friends to leave in search of more promising horizons; drugs claim the lives of those often too high to recognise the danger until it is too late; and Katie dreams of a boy back from 'Nam who's still fighting a battle she doesn't understand.

Ever since I saw the front cover (and epic title) of this novel on Twitter, I knew it was a novel that I just had to read.

#ThisBeautiful - to use the publishers Twitter abbreviation is a beautifully written tale of 1970s America.

Told to us through the eyes of Katie; a young woman about to finish High School with the rest of her life ahead of her.

Residing in Elephant Beach, a fictional Long Island town, Katie and the rest of her friends are eager to spend one 'last' summer together, before they truly settle into adulthood. And this summer is spent, in the way that many teenagers summer's are, by drinking too much, smoking too much and having (unprotected) sex with people that probably you shouldn't.

At times they appear oblivious to the ever changing world around them, but we must remember that they are teenagers and largely uninterested in the economic state of their home town. Many of Katie's friends are eager to leave Elephant Beach, but Katie herself is comfortable where she is, and more importantly comfortable with who she is, although she herself wouldn't see this.

Yet there is only one thing that Katie truly yearns for, that seems unobtainable to her, and that is Luke, a former student at her High School and a Vietnam 'veteran'.

The Vietnam war and it's survivors feature prominently and there are also other major life issues dealt with in #ThisBeautiful and all of them are written beautifully and tackled sensitively.

If I Knew You Were Going To Be This Beautiful, I Never Would Have Let You Go is available to buy now from Amazon online and all good book shops.