Review: Waiting for Doggo by Mark B. Mills 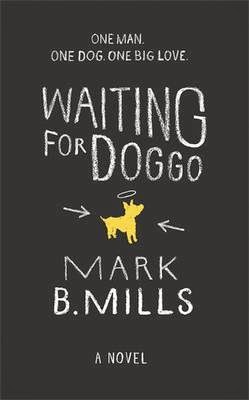 Waiting for Doggo by Mark B. Mills
Publisher: Headline Review
Release date: 20 November 2014
Rating: *****
Back cover blurb: One man. One dog. One big love. The perfect novel for anyone who loves MARLEY AND ME, IT'S A WONDERFUL LIFE or ONE DAY. No-one ever called Dan a pushover. But then no-one ever called him fast-track either. He likes driving slowly, playing Sudoku on his iPhone, swapping one scruffy jumper for another. He's been with Clara for four years and he's been perfectly happy; but now she's left him, leaving nothing but a long letter filled with incriminations and a small, white, almost hairless dog, named Doggo. So now Dan is single, a man without any kind of partner whether working or in love. He's just one reluctant dog owner. Find a new home for him, that's the plan. Come on...everyone knows the old adage about the best laid plans and besides, Doggo is one special kind of a four legged friend...and an inspiration.


I have a confession to make, I've never read a Mark B. Mills novel before, but if 'Doggo' is anything to go by, I wish I had, so whilst you read this, I'm off to look up his back catalogue ;)

Waiting for Doggo is a heart warming tale about a small white ugly (the author's words not mine!) dog called Doggo and his owner Dan, who at the beginning of the novel is dumped, by letter. If that's not heartless enough, Doggo doesn't actually belong to Dan, and was recently rescued from Battersea by Clara, Dan's now ex.

The thing is with Doggo, him and Dan don't get along, he was Clara's to look after, and now she has left them both high and dry. Doggo without an owner and Dan without a partner.

Still, things could be looking up, as much as Dan's mates don't like to say 'I told you so' about Clara - they all did. He is better off out of the relationship and after a false start with Doggo, where he fails to return him to Battersea, the pair begin to build a proper dog-owner relationship.

So much so, that when Dan is offered an exciting new job, he only accepts on the condition that Doggo can come to work with him. At the time this is purely down to logistics (no one home during the day to look after Doggo) rather than any loyalty towards Doggo.

But things are about to change.

Throw in a Clara's sister, a hot work colleague, the mystery of Doggo's previous life and his fascination with all things Jennifer Anniston... and you have a compelling tale of man, and man's best friend.

Huge thank you to the publishers who sent me a proof copy of the novel in exchange for an honest review.