Review: the Great Zoo of China by Matthew Reilly 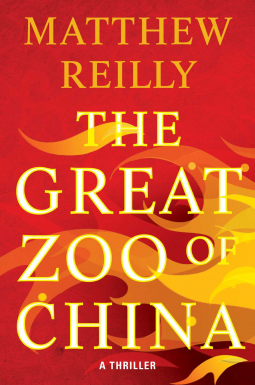 The Great Zoo of China by Matthew Reilly
Publisher: Gallery Books
Release date: 27 January 2015
Rating: ****
Back cover blurb:
It is a secret the Chinese government has been keeping for forty years. They have found a species of animal no one believed even existed. It will amaze the world. Now the Chinese are ready to unveil their astonishing discovery within the greatest zoo ever constructed. A small group of VIPs and journalists has been brought to the zoo deep within China to see its fabulous creatures for the first time. Among them is Dr. Cassandra Jane “CJ” Cameron, a writer for National Geographic and an expert on reptiles. The visitors are assured by their Chinese hosts that they will be struck with wonder at these beasts, that they are perfectly safe, and that nothing can go wrong. Of course it can’t…

So firstly, I want to thank the publisher for inviting me to read this intriguing novel. If I'm totally honest, I'm not sure it's one I would have taken much notice of otherwise. But I would have been wrong had this been the case.

When C.J. Cameron and her brother Hamish are invited (alongside other privileged media and govermnent personnel) to the zoo to report back for National Geographic in the U.S. they are intrigued by the zoo's name 'the Great Zoo of China' and the secrecy surrounding China's latest tourist attraction.

What makes it so great? It's just a zoo right? Wrong, of course!

When they discover the truth after a journey to the site in a plane with blacked out windows, they are both intrigued and concerned at what they see before them.

The concern comes mainly from C.J, the others are pretty much just in awe of their surroundings and the animals that they have just been introduced to.

Sadly their enjoyment doesn't last for long. The creators of the zoo hadn't bargained on their animals intelligence and territorial behaviour becoming an issue. So when the Dragons decide that they want to be in charge, you really don't want to get in their way...

The novel itself is bound to draw comparisons to Jurassic Park. But honestly, I preferred this. I don't why, but I found it more believable. It is so well researched and written, and just like JP would make an excellent film!

The Great Zoo of China is available to pre-order now from Amazon online.

Thank you to the publishers who invited me to read this novel via netgalley in exchange for an honest review.