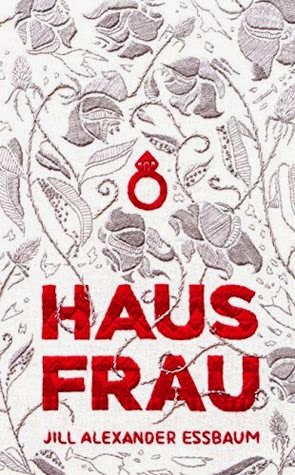 Hausfrau by Jill Alexander Essbaum
Publisher: Mantle
Release date: 26 March 2015
Rating: **** and a half
Back cover blurb: Anna Benz lives in comfort and affluence with her husband and three young children in Dietlikon, a picture-perfect suburb of Zurich. Anna, an American expat, has chosen this life far from home; but, despite its tranquility and order, inside she is falling apart. Feeling adrift and unable to connect with her husband or his family; with the fellow expatriates who try to befriend her; or even, increasingly, her own thoughts and emotions, Anna attempts to assert her agency in the only way that makes sense to her: by engaging in short-lived but intense sexual affairs. But adultery, too, has its own morality, and when Anna finds herself crossing a line, she will set off a terrible chain of events that will end in unspeakable tragedy. As her life crashes down around her, Anna must then discover where one must go when there is no going back .

Anna was a good wife, mostly.
From the very first sentence of Hausfrau I was hooked. It is rare for a novel that focuses on such a passive character as Anna to be able to keep the reader engaged the whole way through. But Anna is so intriging a character that you cannot help but be drawn to her.

Anna Benz lives in Dietlikon, a suburb of Zurich. An American ex-patriate married to a Swiss, Bruno, Anna often feels alone in Switzerland. She doesn't feel as if she fits in. Which is why she takes German classes every week day.

Bruno is oblivious, he believes his wife is happy with him and their three children. Who wouldn't be in such a beautiful setting?

But Anna not happy. Not even with Bruno.

She is a serial adulterer. Her latest in a long line of affairs is Archie, a Scot who happens to be in her German classes. But Archie is not the only man that Anna has in her life, aside from Bruno. Anna simply cannot (or perhaps doesn't want to) say No to anyone.

Inevitably perhaps Anna cannot carry on her shennanigans undectected, but it takes a major tragedy for her to see exactly what she has been doing wrong all this time. But is Anna already too late to save herself from the situation that she has created?

Alongside Anna's narrative, we also see her sessions with a therapist, a further insight in Anna's tangled web of lie, loneliness and deceipt.

Hausfrau handles it subject matter with a sensitivity that you might not expect, and the ending will leave you bereft. An excellent novel that will keep you captivated.

Hausfrau is available from March 2015. You can pre-order now from Amazon online and Pan Macmillan.