Review: Bryant & May- the Burning Man by Christopher Fowler 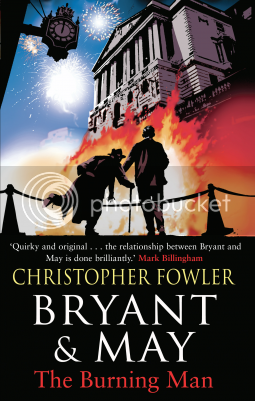 Back cover blurb: London is under siege. A banking scandal has filled the city with violent protests, and as the anger in the streets detonates, a young homeless man burns to death after being caught in the crossfire between rioters and the police. But all is not as it seems; an opportunistic killer is using the chaos to exact revenge, but his intended victims are so mysteriously chosen that the Peculiar Crimes Unit is called in to find a way of stopping him. Using their network of eccentric contacts, elderly detectives Arthur Bryant and John May hunt down a murderer who adopts incendiary methods of execution. But they soon find their investigation taking an apocalyptic turn as the case comes to involve the history of mob rule, corruption, rebellion, punishment and the legend of Guy Fawkes.At the same time, several members of the PCU team reach dramatic turning points in their lives...  contd.


I was very kindly pointed in the direction of this novel by Sophie Christopher at Penguin Random House, and I am very glad I was.

The Burning Man is the 12th novel in the Bryant and May series, but the authors introductions to Bryant and May themselves at the beginning of the novel meant that it really didn't matter if I hadn't read another book in their series (I hadn't).

Bryant and May have a brilliant relationship, both inside and outside of their roles as Detectives for the Peculiar Crime Unit of the City of London police force. Theirs is the kind of relationship experienced by very few. Each has a deep mutual respect for the other, even if they wouldn't admit it!

But the truth is, as Senior decectives, they are seen as bumbling and ageing by many of those around them. Only their closest colleagues are aware of their true brilliance.

In the Burning Man, the crimes that the Peculiar Crime Unit are initially asked to investigate are brutal-but it's nothing Bryant and May haven't seen before.

With Londoners becoming increasingly scared of the rioters on their streets, Bryant and May must work hard to catch a serial killer who seems intent on destroying his chosen victims beyond recognition.

The ending of the novel both surprised and saddened me, and I would love to know if there is another Bryant and May release in the pipeline. In the meantime, I am trying to clear some room on my 'to be read' pile for the previous Bryant and May novels!

Thank you to Sophie Christopher who provided me with an advanced copy of this novel in exchange for an honest review.