Review: CXVI: The beginning of the End by Angie Smith 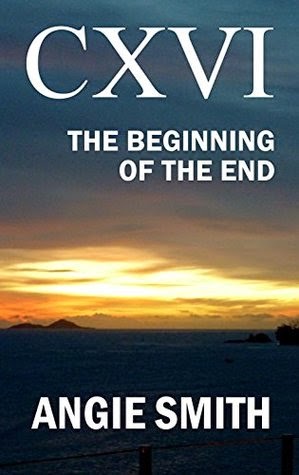 CXVI: The beginning of the End by Angie Smith
Publisher: CreateSpace Independent Publishing Platform
Release date: 8 March 2015
Rating: ****
Back cover blurb: When the murder of a colleague is linked to a series of suspicious deaths, Detective Superintendent Greg Woods’ team are tasked with solving the mystery. New to the team is Maria Barnes, whose besmirched character sadly precedes her. However Woods quickly discovers there is more to the detective sergeant than meets the eye: her skill level, knowledge base, and investigative talents far outshine his own formidable qualities… And why is the Secret Intelligence Service so interested in Barnes and the investigation? It’s a race against time to stop the killer, but he’s meticulous, cunning and ruthless. He leaves the police and intelligence service questioning if they are all out of their depth… When forces contrive against them, Woods’ life hangs in the balance and for the first time in his career he risks contd...


Wow, what an intriguing take on the traditional crime novel.

When Abdul Hussain is found dead; it looks like he committed suicide, a straightforward enough case for DS Greg Woods and his team who are called in to investigate. The police move quickly to try and figure out why Hussain killed himself and why he left roman numerals behind as a clue. But it soon becomes apparent, that this was no suicide and Hussain was in fact murdered.
The team are eager to identify the killer, believing that the killing is a one off. Sadly they are too late, there has already been another death, involving roman numerals and it appears that the murders are linked. The killer is elusive, meticulous and clearly does not want to be caught. It is soon discovered that both of the deceased crossed paths with the late Gerrard Crean, a very wealthy local business who met a sticky end in a nasty road traffic accident.

A serial killer on the loose who is able to disappear without a trace – nothing terribly unusual about that in the fictional crime world. The local police convinced that there must be links with a wealthy businessman who died in a tragic accident – again nothing unusual there. But this is where things change.

The more the police uncover about Gerrard Crean, the more they begin to wonder about the circumstances surrounding his death. The deceased are all linked to him in some way. Did he order them to be killed? Or was he a scapegoat in someone else’s much larger operation. DS Maria Barnes is determined to find the truth with the help of Woods.

However, it’s not just the police who are interested in their elusive serial killer.

As the plot becomes ever more intense, the relationship between Barnes and Wood is strengthened, they work well together and make an exceptional team. Both are brilliant characters, who work hard to get the results they want, even if it means bending the rules a little (or a lot), whether they will work together in the future remains to be seen (particularly after this novel’s dramatic ending) and I cannot wait for the sequel of this novel to find out.

CXVI: The beginning of the End is available to buy now from Amazon online.

Thank you to the author who provided my copy of this novel in exchange for an honest review.