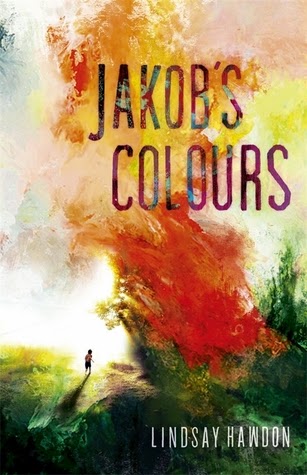 Back cover blurb: Austria, 1944. Jakob, a gypsy boy - half Roma, half Yenish - runs, as he has been told to do. With shoes of sack cloth, still bloodstained with another's blood, a stone clutched in one hand, a small wooden box in the other. He runs blindly, full of fear, empty of hope. For hope lies behind him in a green field with a tree that stands shaped like a Y. He knows how to read the land, the sky. When to seek shelter, when not. He has grown up directing himself with the wind and the shadows. They are familiar to him. It is the loneliness that is not. He has never, until this time, been so alone. 'Don't be afraid, Jakob,' his father has told him, his voice weak and wavering. 'See the colours, my boy,' he has whispered. So he does. Rusted ochre from a mossy bough. Steely white from the sap of the youngest tree. On and on, Jakob runs. Spanning from one world war to another... contd.


Jakob’s Colours like so many is a novel that I first heard of via Twitter. I immediately requested it via Bookbridgr as soon as it became available and was delighted to receive my copy in the post just days before my recent holiday to Italy.

Jakob’s Colours is a beautifully told tale of heartache and loss; the courage of a young boy and the brutality of war.

Jakob’s Colours is told from three main perspectives; those of Yavy (Jakob’s father), Lor (Jakob’s mother) and Jakob himself. And from three separate periods in time; this day -1944, before – 1943 and long before – 20s-30s.

Long before; Yavy and Lor’s first meeting, in the grounds of a mental institution is an unconventional one. But despite her seemingly privileged English upbringing Lor has had a lot to deal with and finds it easy to identify with Yavy. Can they make a new life together, or will they both be haunted by the past?

Before; Separated from Yavy, Lor is desperate to find the man she loves, and knows that there is only one place he could possibly be. With WW2 raging around them, Lor must decide if it is safe for her to find Yavy, or if she should keep her family hidden.

This day; Jakob’s struggle for survival in an unfamiliar world is heartbreaking, but his strength and courage are undeniable. But where are the rest of his family? And will he ever see them again?

Jakob’s colours is a difficult novel to put down. The timespans move effortlessly along, and at no stage did I have any difficulty following the characters progress.

As a lover of historical fiction (particularly war based historical fiction) I can confirm that the story of the Romany (gypsy) holocaust during WW2 is one that is seldom told. But it is a story that needs to be heard and Jakob and his family are the perfect narrators to this tragic tale.

Jakob’s Colours is one of my favourite novels so far this year.


Jakob's Colours is available to buy now from Amazon online and all good book shops.

Thank you to the publishers who approved my request via bookbridgr in exchange for an honest review.