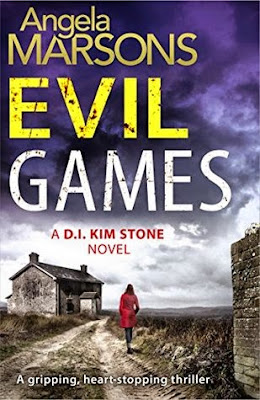 Back cover blurb: The greater the evil, the more deadly the game ... When a rapist is found mutilated in a brutal attack, Detective Kim Stone and her team are called in to bring a swift resolution. But, as more vengeful killings come to light, it soon becomes clear that there is someone far more sinister at work. With the investigation quickly gathering momentum, Kim soon finds herself exposed to great danger and in the sights of a lethal individual undertaking their own twisted experiment. Up against a sociopath who seems to know her every weakness, for Detective Stone, each move she makes could be deadly. As the body count starts to mount, Kim will have to dig deeper than ever before to stop the killing. And this time - it’s personal.
Evil Games is Angela Marsons second novel, I haven't yet had the pleasure of reading her first 'Silent Scream', but having read Evil Games, I'll be sure to add it to my ever growing to be read list!

Evil Games opens with a raid on a property whose inhabitants are suspected of committing child abuse.
To make things worse, it is the family's Father who is suspected of abusing his own children. DI Kim Stone is determined to leave no stone unturned in her team's quest for justice.

Meanwhile an ex-rapist is found dead, having been stabbed multiple times. Kim's team don't have to look far to find the murderer, and although there is a clear motive, Kim isn't convinced that the murderer alone is too blame for the crime they have commited.

The majority of her team disagree with her, so Kim finds herself questioning the murderer's former therapist alone.Trying to find answers as to why the murderer acting in the way that the did.
What she discovers upon her first meeting intrigues and unsettles her but she cannot say why. As she delves deeper in the case and questions the therapist further, the novel takes the novel on a shocking path and you simply will not be able to put this one down!
Kim Stone (and most of her team) are all thoroughly likeable characters and Angela does a great job of making them as flawed and as real as possible. After all, none of us are perfect! Kim's relationship with her DS Bryant is just brilliant, and I look forward to reading more about the pair of them soon.
Evil Games is available from 29 May 2015.
You can pre-order it now from Amazon online and Bookouture.

Thank you to Bookouture who approved my request via netgalley in exchange for an honest review.