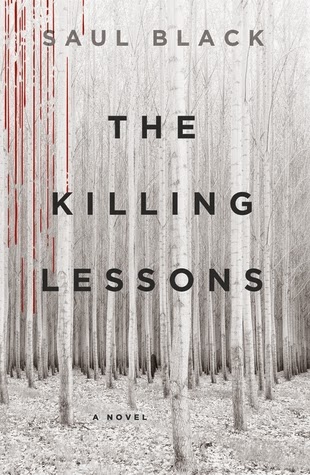 the Killing Lessons by Saul Black
Publisher: Orion
Release date: 21 May 2015
Rating: *** and a half
Back cover blurb: When the two strangers turn up at Rowena Cooper's isolated Colorado farmhouse, she knows instantly that it's the end of everything. For the two haunted and driven men, on the other hand, it's just another stop on a long and bloody journey. And they still have many miles to go, and victims to sacrifice, before their work is done. For San Francisco homicide detective Valerie Hart, their trail of corpses - women abducted, tortured and left with a seemingly random series of objects inside them - has brought her from obsession to the edge of physical and psychological destruction. And she's losing hope of making a breakthrough before that happens. But the slaughter at the Cooper farmhouse didn't quite go according to plan. There was a survivor, Rowena's 10-year-old daughter Nell, who now holds the key to the killings. Injured, half-frozen, terrified, Nell has only one place to go. And that place could be even more terrifying than what she's running from.

The Killing Lessons is the first Saul Black novel that I have read. Apparently he also writes as Glen Duncan...but I haven't read any of those either!

The Killing Lessons for me is a difficult one to review. I absolutely loved parts of it, hated others and feel indifferent about the bits inbetween! It has quite a dramatic opening, in fact the first half of the novel is quite dark, gritty and disturbing until we meet the local police, who I have to be honest, for me were a little underwhelming.

For me, the pace of the novel changes as soon as the cops are introduced, and although I understand the need for police procedural work to be dealt with in some depth. I didn't enjoy the second part of the novel as much, it kind of felt like someone had taken their foot off the accelerator.

Nell Cooper was by far my favourite character. We meet her, alongside her Mother and Brother at the beginning of the novel just before they are brutually murdered and Nell escapes. Her courage and strength are admirable, and I would love to know where her character ends up after the novel has ended.

Valerie Hart is hunting a serial killer, possibly two, Rowena Cooper and her son are just numbers being added to her investigation. An investigation that is undoubtedly tough, is made more difficult by the appearance of a face from Valerie's past. I'm not entirely sure what relevance this had, other than to give Valerie a bit more a back story.

And then we have our serial killer(s). Two seriously disturbed individuals who I think actually make the novel more believable. Because we all know that serial killers are not 'normal' human beings, and the author does a great job of getting inside their warped and twisted minds.

I think perhaps I'm used to reading novels where everything happens all at once. At times the Killing Lessons to me felt a little disjointed as the author concentrated on a particular character or event for more than one chaper. I understand that many may appreciate this style and it's not a criticism as such, I think I'm just used to reading much more fast-paced thrillers.

the Killing Lessons is available from 21 May 2015. You can pre-order it now from Amazon online.