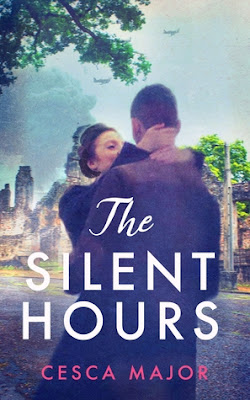 Back cover blurb: An epic, sweeping tale of love and loss inspired by heartrending true events in the Unoccupied Zone of wartime France. The Silent Hours follows three people whose lives are bound together, before war tears them apart: Adeline, a mute who takes refuge in a convent, haunted by memories of her past; Sebastian, a young Jewish banker whose love for the beautiful Isabelle will change the course of his life dramatically; Tristan, a nine-year-old boy, whose family moves from Paris to settle in a village that is seemingly untouched by war. Beautifully wrought, utterly compelling and with a shocking true story at its core, The Silent Hours is an unforgettable portrayal of love and loss.

the Silent Hours is an exceptional debut novel from a very talented novelist. From the very first page Cesca Major had be gripped, so much so, that I literally didn't put the novel down until I had finished it about three and a half hours later.

Opening with Adeline, mute in a nunnery in 1952, you know that something horrific has taken place, but with Adeline unable (or unwilling) to speak, you are left wondering exactly what that could be.

Told from various viewpoints; mainly Isabelle, Sebastian and Tristan during wartime and Adeline after, the Silent Hours is a beautifully woven tale of how war effects us all without us even noticing it at times.

Isabelle is a beautiful young woman, who is missing her Brother, Paul, who has gone away to fight. When she meets Sebastian by chance, she falls for him almost instantly and she begins to enjoy life for what it is.

Oradour is unoccupied during World War Two and the residents, particularly Sebastian, fail to see what all the fuss is about. For although his Father has been forced out of Banking, Sebastian is blissfully (and perhaps a little ignorantly) unaware of the consequences of being a Jew.

As the Germans grow closer to Oradour, Sebastian's parents go missing whilst he is visiting Isabelle one evening. As he slowly begins to realise the danger he could be in, Sebastian flees to a Jewish hideway deep in the woods.

The last few pages are particularly tragic, and left me wondering if there could ever be a sequel on the cards? (Wishful thinking on my behalf I think!!)

A beautifully written debut that everyone should read this year.

The Silent Hours is available to buy now from Amazon online and all good book shops.