Review: The Betrayal by Laura Elliott 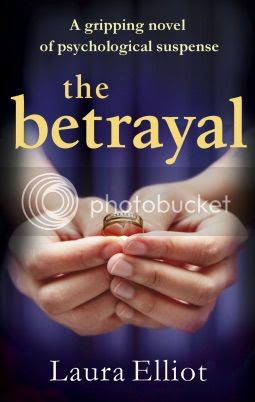 Back cover blurb: A perfect divorce. A new flame. And a deadly obsession. Nadine and Jake Saunders were married in their teens. Tied to one another by a night of passion that resulted in a pregnancy neither could turn away from. Now, years later, their children have all flown the nest and the pact they made as teenagers – to give one another the freedom to pursue their own dreams – has resurfaced. But freedom comes at a price … While Nadine and Jake begin to untangle their lives from one another, Jake embarks on a passionate affair with a beautiful woman, Karin Moyes. What he doesn’t know is the dark history Karin shares with Nadine. As lust spirals into dangerous obsession, Jake must break free from Karin. But he must also ask himself how well he ever really knew Nadine. What secret is she hiding? The truth, when it is revealed, could destroy them all.

The Betrayal is my first Laura Elliott novel, but I shall certainly be seeking out her others after reading this.

Nadine and Jake Saunders are looking for the perfect divorce. After marrying as teenagers due to an unplanned pregnancy, they both agree that the time has come for them to move into separate lives, particularly now that their four children are all adults living their own lives.

Neither of them are expecting a face from the past to re-enter their lives.

Jake meets Karin Moylan on a flight to New York, he remembers her from a summer long ago where she and Nadine were best friends, and he was the lead singer of an upcoming rock band Shard.

She reminds him of a night long ago, and makes it clear that she will be waiting for him when he separates from Nadine. When Karin’s business card falls from Jake’s wallet whilst he and Nadine are having dinner, Nadine is furious and believes he has been unfaithful to her prior to them deciding to separate.

Jake attempts to assure Nadine that this is not the case. But she is reluctant to believe him, and Jake wonders exactly why Nadine seems to hate Karin so much? Unfortunately for Jake it doesn’t take him long to discover Karin’s true manipulative personality.

Karin has never forgiven Nadine for marrying Jake when she wanted him so much the summer they were teenagers, but there is something else. Something that neither of them are prepared to talk about, until Karin starts sending out letters to Nadine’s family.

The Betrayal is told mainly from Nadine and Jake’s points of view which really gives us as a reader an all-round view of just how scary Karin Moylan is. Psychopath, Sociopath.. she could fit all of these descriptions and more. But will she get what she wants? Or is her world set to come crashing down around her as she would like it to do to others?

You will have to read for yourself to find out. I assure you you won’t be disappointed!


The Betrayal is available to buy now from Amazon online.