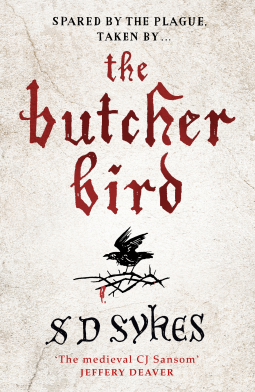 The Butcher Bird by SD Sykes
Publisher: Hodder & Stoughton
Release date: 8 October 2015
Rating: ****
Back cover blurb: Oswald de Lacy is growing up fast in his new position as Lord of Somershill Manor. The Black Death changed many things, and just as it took away his father and elder brothers, leaving Oswald to be recalled from the monastery where he expected to spend his life, so it has taken many of his villagers and servants. However, there is still the same amount of work to be done in the farms and fields, and the few people left to do it think they should be paid more - something the King himself has forbidden. Just as anger begins to spread, the story of the Butcher Bird takes flight. People claim to have witnessed a huge creature in the skies. A new-born baby is found impaled on a thorn bush. And then more children disappear. Convinced the bird is just a superstitious rumour, Oswald must discover what is really happening. He can expect no help from his snobbish mother and his scheming sister Clemence, who is determined to protect her own child, but happy to neglect her step-daughters. From the plague-ruined villages of Kent to the thief-infested streets of London and the luxurious bedchamber of a bewitching lady, Oswald's journey is full of danger, dark intrigue and shocking revelations.

Barrow lost his children and his wife in the Plague and is convinced that he saw a 'Butcher Bird' rising from the coffin, 'a monstrous bird...with great talons and a huge hooked beak'. Certain that Barrow is mad he decides not to punish him.

A baby is then found in the local bushes with what looks like claw marks from an attacking butcher bird.

The locals soon become hysterical demanding that Oswald lock Barrow up for releasing the bird and throw away the key.

But Oswald feels sorry for the man and instead lets him stay at his own home, much to the chagrin of those around him.

Meanwhile Oswald's sister Clemence is about to give birth and he must visit her and her step-children as her husband was murdered.

Oswald is called back to his home town by the disappearance of Barrow and the murder of another child. Convinced the two are linked, the locals are once again baying for Barrow's blood.

Can Oswald help prove his innocence or has he too been taken for a fool by Barrow?
The Butcher Bird is available to buy now from Amazon online and all good book shops.

Thank you to the publishers who invited me to review this novel via netgalley in exchange for an honest review.
I will be taking part in the Butcher Bird blog tour: 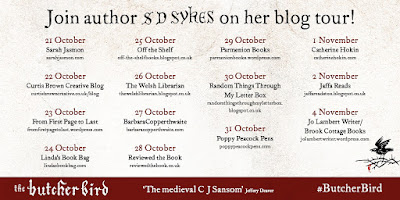