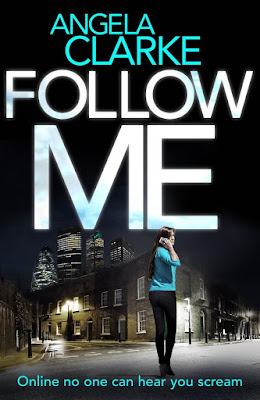 Follow Me by Angela Clarke
Publisher: Avon Books UK
Release date: 3 December 2015
Rating: *****
Back cover blurb: LIKE. SHARE. FOLLOW . . . DIE. The ‘Hashtag Murderer’ posts chilling cryptic clues online, pointing to their next target. Taunting the police. Enthralling the press. Capturing the public’s imagination. But this is no virtual threat. As the number of his followers rises, so does the body count. Eight years ago two young girls did something unforgivable. Now ambitious police officer Nasreen and investigative journalist Freddie are thrown together again in a desperate struggle to catch this cunning, fame-crazed killer. But can they stay one step ahead of him? And can they escape their own past? Time’s running out. Everyone is following the #Murderer. But what if he is following you? ONLINE NO ONE CAN HEAR YOU SCREAM …


Freddie Venton is trying to break her way into journalism and not having an awful lot of luck. That is until she stumbles upon a crime scene after following an old school friend, Nasreen Cudmore.

Naz has done remarkably better for herself than Freddie, and is a sergeant in the Police force. The two of them were laregly inseperable growing up, until a falling out that had them lose contact with each other.

As a budding reporter Freddie spends a lot of her time on social media, particularly Twitter, always hunting down the next lead for a story. She is the first to see a tweet of the crime scene presumably from the perpetrator soon to be dubbed, the #Hashtag Murderer.

After being arrested for the crime that she clearly did not commit, to avoid a charge, Freddie reluctantly agrees to become social media adviser to the case.

As the suspect continues tweeting it is clear that the crime scene Freddie chanced upon, is not a one off. Twitter has a serial killer…

Follow Me really showcases the fact that we do not know who anyone is online, and even the most prolific of social media users have the ability to be surprised by others activities.

Follow Me is a real edge of the seat thriller and its conclusion for me at least, was a surprising one.

In a world where crime, thriller and suspense novels grow ever more popular it is no mean feat for an author keep the reader gripped and then surprise them as Angela Clarke does.

Follow Me is a highly enjoyable novel that will make you think twice before your next social media posting….

Follow Me is available from 3 December 2015.
You can pre-order it now from Amazon online and Harper Collins.