Review: The Woman Next Door by Yewande Omotoso 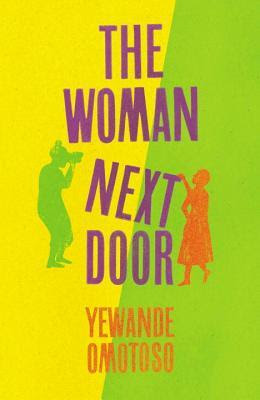 Back cover blurb: Hortensia James and Marion Agostino are neighbours. One is black, one white. Both are successful women with impressive careers. Both have recently been widowed. And both are sworn enemies, sharing hedge and hostility which they prune with a zeal that belies the fact that they are both over eighty. But one day an unforeseen event forces the women together. And gradually the bickering and sniping softens into lively debate, and from there into memories shared. But could these sparks of connection ever transform into friendship? Or is it too late to expect these two to change?

Hortensia James and her next door neighbour Marion Agostino are sworn enemies. Both are in their Eighties and have both been members of the local community committee for years.

It is at one of these meetings that we first meet the two ladies together and encounter their bickering. Their dislike for each other is palpable. Neither woman is afraid of saying exactly what she thinks even if it might hurt those around her.

Hortensia's husband is dying, Marion's husband already dead. You would think the neighbours at last, might have some common ground.

But both have been bought up in very different backgrounds, racially and culturally and Marion in particular has a hard time accepting Hortensia for the remarkable woman that she is, beyond the colour of her skin.

A series of remarkable events lead the two ladies to become closer to each other than either ever wished to be. One of them dependant upon the other.

Could this finally the start of a truce? Or even a friendship?

Or is too late for either of them to 'start again'?

The Woman Next Door is available now from Amazon online and all good book shops.

Thank you to the publishers who sent me an advanced proof of this novel in exchange for an honest review.