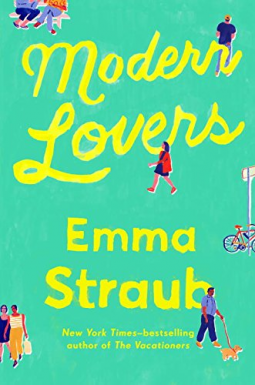 Modern Lovers by Emma Straub
Publisher: Michael Joseph
Release date: 30 June 2016
Rating: *** and a half
Back cover blurb: Friends and former college bandmates Elizabeth and Andrew and Zoe have watched one another marry, buy real estate, and start businesses and families, all while trying to hold on to the identities of their youth. But nothing ages them like having to suddenly pass the torch (of sexuality, independence, and the ineffable alchemy of cool) to their own offspring. Back in the band's heyday, Elizabeth put on a snarl over her Midwestern smile, Andrew let his unwashed hair grow past his chin, and Zoe was the lesbian all the straight women wanted to sleep with. Now nearing fifty, they all live within shouting distance in the same neighborhood deep in gentrified Brooklyn, and the trappings of the adult world seem to have arrived with ease. But the summer that their children reach maturity (and start sleeping together), the fabric of the adult lives suddenly begins to unravel, and the secrets and revelations that are finally let loose about themselves, and about the famous fourth band member who soared and fell without them can...

Modern Lovers is the second of Emma Straub's novels that I have now had the pleasure of reading and I hope it won't be the last.

Elizabeth Marx, her husband Andrew, and their best friend Zoe are stunned when approached by an agent looking to make a biopic about their former band mate and college friend, Lydia.

Those days seem so far behind them now. Those carefree days of drinking, party's, gigs and slate night songwriting sessions.

Now each have their own kids; Elizabeth and Andrew have 17 year old Harry and Zoe and her wife Jane have 18 year old Ruby.

They are all successful, Elizabeth as a real estate agent, and Zoe and have a restuatant together.

Whilst Andrew doesn't really a job as such...

Andrew is also the only one of them who is reluctant to sign on the line for the movie. Is it a coincidence that he currently seems to be going through some sort of mid life crisis?

Modern Lovers explores the way in which a past you thought was left far behind can suddenly appear out of nowhere and bring you challenges all over again.

A great novel with some lovely (and some not so) characters. I look forward to Emma Straub's next.

Modern Lovers is available from 30 June 2016.
You can pre-order it now via Amazon online.