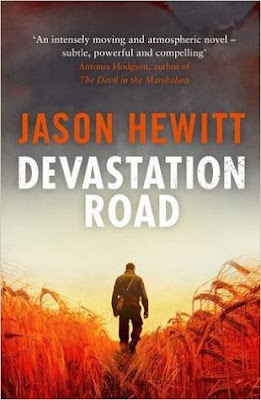 Devastation Road by Jason Hewitt
Publisher: Scribner UK
Release date: 14 July 2016
Rating: *****
Back cover blurb: Spring, 1945: A man wakes in a field in a country he does not know. Injured and confused, he pulls himself to his feet and starts to walk, and so sets out on an extraordinary journey in search of his home, his past and himself. His name is Owen. A war he has only a vague memory of joining is in its dying days, and as he tries to get back to England he becomes caught up in the flood of refugees pouring through Europe. Among them is a teenage boy, Janek, and together they form an unlikely alliance as they cross battle-worn Germany. When they meet a troubled young woman, tempers flare and scars are revealed as Owen gathers up the shattered pieces of his life. No one is as he remembers, not even himself - how can he truly return home when he hardly recalls what home is?

Spring 1945 and Owen wakes up in a field in the middle of nowhere, with no idea where is (he doesn't even know what country he is in), what year it is, and no recollection of how he came to rest there and he doesn't much care, he just wants to get home.

Injured, confused and looking for his Brother Max, Owen is at first grateful to stumble across Janek, a young Czechoslovakian also looking for his brother, but his gratitude soon turns to annoyance and all Owen wants is to be left alone.

And then they are joined by Irena, a mysterious young girl who also says she desperately needs their help. And perhaps she does, because she seems to young to look after the baby that she claims is hers, and wants to find it's Father so that he may look after it instead.

From very different backgrounds these three have little in common other than their desperation to get home and find the ones they love. But their journey is not simple. Much of Europe has been devastated by the War and there are bodies and refugees everywhere they turn.

As they make their journey, Owen's memory comes back to him in stages, from his early childhood, to just before the War broke out. Slowly we begin to understand how he woke up in that field, injured at the novel's beginning.

Devastation Road is a beautifully written novel about the complexities, unlikely friendships forger and the legacy and aftermath of a World War, even after it appears to all be over. I very much look forward to this authors next...

Devastation Road is available now from Amazon online and all good book shops.
Thank You to the author who sent me a copy of this novel in exchange for an honest review.