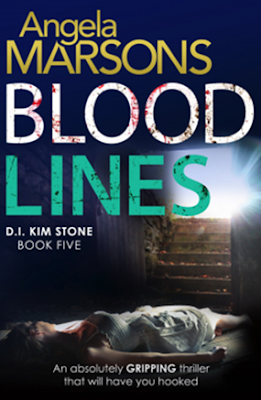 Back cover blurb: How do you catch a killer who leaves no trace? A victim killed with a single, precise stab to the heart appears at first glance to be a robbery gone wrong. A caring, upstanding social worker lost to a senseless act of violence. But for Detective Kim Stone, something doesn’t add up. When a local drug addict is found murdered with an identical wound, Kim knows instinctively that she is dealing with the same killer. But with nothing to link the two victims except the cold, calculated nature of their death, this could be her most difficult case yet. Desperate to catch the twisted individual, Kim’s focus on the case is threatened when she receives a chilling letter from Dr Alex Thorne, the sociopath who Kim put behind bars. And this time, Alex is determined to hit where it hurts most, bringing Kim face-to-face with the woman responsible for the death of Kim’s little brother – her own mother. Contd...

Blood Lines is book number five in Angela Marson's D.I. Kim Stone series and the books just continue to keep on getting better.

So Kim Stone is back and facing a woman, an enemy she is determined not to let get to her again. But Dr. Alexandra Thorne is a very determined woman - a sociopath with a grudge to bear.
When a woman's body is found with a distinctive stab wound, at first it appears to be a simple car jacking, but on closer inspection, the woman's belongings, and the car itself are still there and still pretty much in tact.

When another body throws up similarities, Kim and her team must decide if the murders are connected or not.

At first glance it appears that the victims backgrounds are very different, and a handsome kitchen fitter is all they have in common.

Blood Lines is another gripping novel by Angela Marsons, and Kim Stone just keeps getting better as a character - roll on book number Six!!

Blood Line is available to buy now via Amazon online and all good book shops.