Review - The Secret by Katerina Diamond 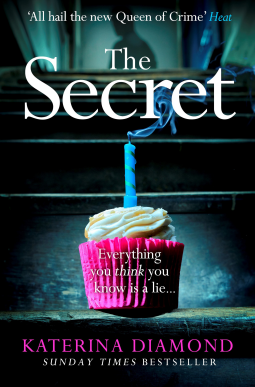 The Secret by Katerina Diamond
Publisher: Avon
Release date: 20 October 2016
Rating: *****
Back cover blurb:
The Queen of Grip-lit is back… EVERYTHING YOU THINK YOU KNOW IS A LIE… When Bridget Reid wakes up in a locked room, terrifying memories come flooding back – of blood, pain, and desperate fear. Her captor knows things she’s never told anyone. How can she escape someone who knows all of her secrets? As DS Imogen Grey and DS Adrian Miles search for Bridget, they uncover a horrifying web of abuse, betrayal and murder right under their noses in Exeter. And as the past comes back to haunt her, Grey must confront her own demons. Because she knows that it can be those closest to us who hurt us the most…

Her first novel, came with the caveat ‘not for the faint hearted’.

If anything, the Secret is a more disturbing novel, particularly in view of its subject matter.
Bridget Reid is missing, feared dead, and two young women are found murdered in the home that she was last seen in.

Elias Papas owns Aphrodite nightclub where two young murder victims have recently visited.
Is this a coincidence or were they both just in the wrong place at the wrong time?
One of his employees, Dean Kinkade is the kind of villain that everyone loves to hate, or should that be hates to love?

He is your typical lovable rogue – hard-core but there is definitely a heart in their somewhere…
Are either of them implicated, or is it all far more complex than that? Miley and Grey have their work cut out trying to find the answers in this particular case.

Detectives Adrian Miles (Miley) and Imogen Grey have a wonderfully realistic partnership and I can’t wait for the next novel – I feel sure that there must be one on its way as the ending of the Secret left me hanging – in a good way.

The Secret by Katerina Diamond is available to buy now via Amazon online and all good book shops.