Review - The Many by Nathan Field 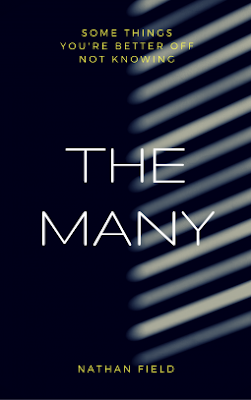 Back cover blurb: Karl notices something odd about his sister the morning after a blind date. A coldness in her manner; nothing anyone else would notice. Suspicious, he confronts her about the date but she turns nasty, accusing him of taking a perverse interest in her sex life. When he next sees her, months later, she seems back to normal, until a harmless comment provokes a sudden, violent response. As her mental state fluctuates, Karl seeks out the man she dated just before her personality began to change, convinced she is suppressing a painful memory from that night. But what he discovers is something far more sinister, and pervasive, than he'd ever imagined. Strictly for adult readers, THE MANY is the first book of a trilogy that explores contemporary themes of corruption, sexuality and gender, while shedding light on a shadowy evil that is both disturbing and eerily familiar.

When Karl's sister goes on a blind date with a handsome ophthalmologist, Karl realises that he should be pleased for her, after all, a highly paid, handsome Doctor is quite the catch...

But when she returns the following day, having declined to show up for work or tell any of her family where she is. Karl is convinced that something happened to her.

Stacey has always dated, sometimes she has even gone home with her dates. But none of them seem to have affected her so deeply before. It's almost as if she has has a personality transplant.

Karl is sick with worry for his Sister as her behaviour grows increasingly erratic and at times violent, he refers her to a psychologist. When she is placed under hypnotherapy, things take a dramatic turn for the worse and Karl is more concerned than ever.

When Karl hears about Dawn, a woman whose Mother seems to have suffered a similar fate to Stacey, he realises that the similarities are too close to ignore, even though her Mother's date was with another woman.

With detectives thinking that Karl and Dawn are at best making it up, at worst a little bit loopy, they know they must work together to get justice for their loved ones.

The Many is an original story that will keep you gripped and thinking twice before trying any online dating in the future.

The Many is available to buy now via Amazon online.
Thank You to the publishers who approved my request via netgalley in exchange for an honest review.