Review - Behind Her Eyes by Sarah Pinborough 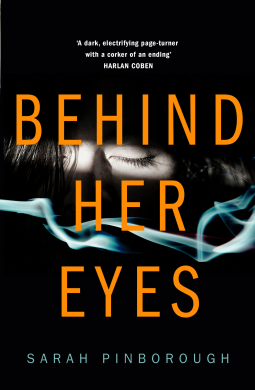 Back cover blurb: Don’t trust this book. Don’t trust this story. Don’t trust yourself. David and Adele seem like the ideal pair. He's a successful psychiatrist, she is his picture-perfect wife who adores him. But why is he so controlling? And why is she keeping things hidden? As Louise, David's new secretary, is drawn into their world, she uncovers more puzzling questions than answers. The only thing that is crystal clear is that something in this marriage is very, very wrong. But Louise can't guess how wrong – and how far someone might go to protect their marriage's secrets.

There's a reason that this novel has been branded with the hashtag #WTFthatending before its publication. When you get your hands on a copy you will understand why. I mean, seriously, WTF?!

Behind Her Eyes is SO much more than a psychological thriller.

Although when you first start reading, it seems to be the standard toxic marriage, horrible unlikeable characters it soon becomes clear that there is something different about this book.

Louise meets David, a handsome stranger in a bar, and kisses him before she; has any idea that he is about to be her new boss; and before she realises he is married. Louise is a sensible woman, as a divorced single parent, she has to be. But David has awoken something deep inside of her that makes her throw caution to the wind and entangle herself up with him.

Then she meets Adele, David's beautiful wife, and wonders what on earth she is doing. What on earth is David doing? Adele is perfect for him. They are perfect together. Why on earth is he looking elsewhere?

Adele is lonely, with no friends to speak of, she doesn't know of Louise's connection to her husband and wants to be her friend. Louise is too nice of a person to deny Adele her friendship, but she realises that she is getting herself into something that is not going to be easy or pleasant to get back out of again.

Told from both Louise and Adele's perspectives, Behind Her Eyes is a novel that will have you tied up in knots. You will not know who to trust, who to believe, and at points, you will not have a clue what on earth is going on -  and it is brilliant!

Behind Her Eyes is available from 25 January 2017.
You can pre-order it now via Amazon online.