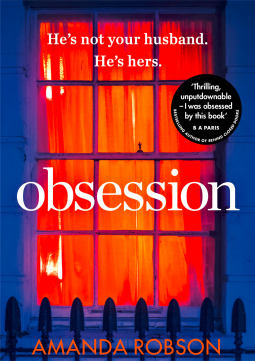 Obsession by Amanda Robson
Publisher: Avon Books UK
Release date: 4 May 2017
Rating: *** and a half stars

Back cover blurb: Two couples. A doctor’s surgery. A deadly obsession. Who’s telling the truth? ‘Who else would you go for, if you could? Give me a name, someone you quite like.’ He shrugs his shoulders. A jawline held tight. ‘I quite like Jenni. What about you?’ I don’t reply. Carly and Rob, Jenni and Craig. Two couples, four friends. Betraying each other. Wanting each other. All of them have access to prescription drugs through the medical practice where they work, and all of them are fighting their own demons. But can any of them be trusted? And when the lies begin, can they ever be silenced?

Obsession is a novel that does exactly as it says on the cover, leads you to obsession. You simply won't be able to stop reading until you've reached its conclusion.

It's an obsession that starts innocently enough. A conversation between a loving husband and wife. Carly asks her husband Rob who he would 'go for' if he was given the choice. At first he is reluctant to answer. Rob loves Carly he doesn't want anyone else.

Carly is persistent. 'Give me a name'.

And so Rob does. 'Jenni'. Carly's "best friend". The consequences are devastating.

Obsession is a novel where you won't find yourself with much sympathy for any of the characters.

Carly is dislikeable from the outset. Manipulative, selfish and sex obsessed. Rob her husband is okay, there's something unlikeable there but it isn't clear at first exactly what.

You can trust no one.

Obsession isn't a novel for everyone, at times it makes for uncomfortable reading, but it's a novel that has an important lesson for us all - obsession no matter how big, or how small, can be a very dangerous thing indeed...

Obsession is available now via Amazon online and all good book shops.

Thank You to the publishers who invited me to view this novel via netgalley in exchange for an honest review.