Review - The Wages of Sin by Kaite Welsh 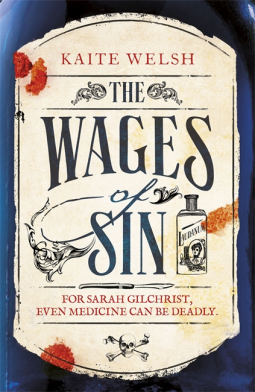 Rating: *****
Back cover blurb: An irresistible mystery set in 1890s Edinburgh, Kaite Welsh's THE WAGES OF SIN features a female medical student-turned-detective, and will thrill fans of Sarah Waters and Antonia Hodgson. Sarah Gilchrist has fled from London to Edinburgh in disgrace and is determined to become a doctor, despite the misgivings of her family and society. As part of the University of Edinburgh's first intake of female medical students, Sarah comes up against resistance from lecturers, her male contemporaries, and - perhaps worst of all - her fellow women, who will do anything to avoid being associated with a fallen woman... When one of Sarah's patients turns up in the university dissecting room as a battered corpse, Sarah finds herself drawn into Edinburgh's dangerous underworld of bribery, brothels and body snatchers - and a confrontation with her own past.

The wages of Sin tells the tale of Sarah Gilchrist, a society outcast as a result of an unwanted suitor. Banished from London to Scotland to her Aunt Emily’s.

Sarah’s purpose in Scotland is not solely familial, she has been accepted onto the first female medical course at the University as she follows her dreams of becoming a Doctor.

She also volunteers at a charitable institution, keen to be seen to be doing something to help the local community away from her studies.

The women on Sarah’s course all seem to be against her despite their shared desire to prove all the doubters of women Doctor’s wrong, and indeed those against women studying in general.

Sarah find solace in her work at the charity and questions her own suitability to the role of Doctor when she finds herself unable to help a young female patient. Lucy, a prostitute is pregnant, and desperate. But the charity has a reputation to uphold and will not perform an illegal abortion despite Lucy’s distress.

Sarah wishes there was something she could do to help, so when Lucy turns up unexpectedly and tragically at the University’s morgue to be used in the pupils surgical studies Sarah vows to find out more.

The official death verdict is suicide, but Sarah doesn’t think that however desperate Lucy was, she would have succumbed to that. And then there are her injuries...

Convinced that Lucy was murdered Sarah ignores the warnings of all those around her as she desperately seeks the truth. However the truth may be awful even for Sarah to comprehend, and her quest to find the truth more dangerous than she imagined.

The Wages of Sin is an impressive debut, and I look forward to reading more from this author.

The Wages of Sin is available now via Amazon online and all good book shops.

Thank You to the publishers who approved my request via netgalley in exchange for an honest review.
﻿