Review - An Act of Silence by Colette McBeth 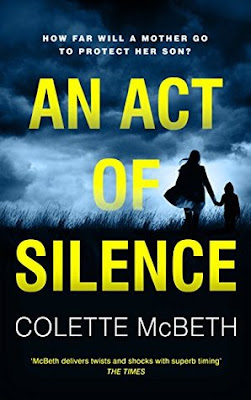 Back cover blurb: These are the facts I collect. My son Gabriel met a woman called Mariela in a bar. She went home with him where they had sex. They next morning she was found in an allotment. Mariela is dead. Gabriel has been asked to report to Camden Police station in six hours for questioning. Linda Moscow: loving Mother to Gabriel. Linda promised herself years ago that she would never let her son down again.Even if it means going against eveerything she believes in - she will do anything to protect him. She owe him that much. Gabriel Miller: the prodigal son. He only ever wanted his mother's love, but growing up he always seemed to do the wrong thing. If his mother could only see the bad in him - how could he possibly be good?

An Act of Silence is another cracker of a novel from Colette McBeth.


Gabriel Miller is a man on the edge. Mariela, a woman he met in a bar is dead. But Gabriel didn't kill her. The trouble is he doesn't have an alibi, and he isn't sure his mother believes his story. He was always a troubled child. Finding fame as an adult hasn't calmed his demeanour.

His mother hasn't seen him for months when he turns up at her house unannounced, he is due at the police station for questioning in a matter of hours. He doesn't even know why he has turned to his mother for help, she has never really been on his side in the past but he has no idea why.

But he does know that he needs help.

Gabriel's mother is Linda Moscow is a former politician, former Home Secretary who had to leave the government under circumstances beyond her control. She wanted to stay and fight in what she believed in, but her family was much more important to her. Her family now consists of only her and Gabriel and her housekeeper, Anna.

Gabriel doesn't really need her. He has his own house, his own career. He doesn't need his disgraced mother. Besides, Linda has had enough to of lies. It isn't that she doesn't believe or trust her own son, she just doesn't believe in the justice system, doesn't feel the need to get dragged into her son's mess.

Linda knows that some would think her cold hearted. But she knows that she is doing what she believes is best for both her and her son. She'd like to say she doesn't care what other people think. But that would be about as far from the truth as anyone could get.

An Act of Silence is a gripping novel that you won't want to put down.


An Act of Silence is available now via Amazon online and all good book shops.

Thank You to the publisher who sent me an advance copy of this novel in exchange for an honest review.