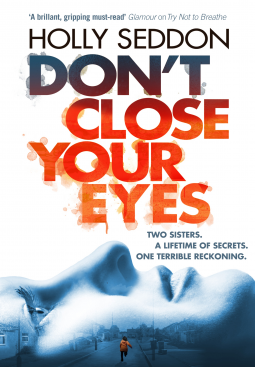 Publisher: Atlantic Books (Corvus)
Release Date: 6 July 2017
Rating: **** and a half
Back cover blurb: Robin and Sarah weren't the closest of twins. They weren't even that similar. But they loved each other dearly. Until, in the cruellest of domestic twists, they were taken from one another. Now, in her early 30s, Robin lives alone. Agoraphobic and suffering from panic attacks, she spends her days pacing the rooms of her house. The rest of the time she watches - watches the street, the houses, the neighbours. Until one day, she sees something she shouldn't... And Sarah? Sarah got what she wanted - the good-looking man, the beautiful baby, the perfect home. But she's just been accused of the most terrible thing of all. She can't be around her new family until she has come to terms with something that happened a long time ago. And to do that, she needs to track down her twin sister. But Sarah isn't the only person looking for Robin. As their paths intersect, something dangerous is set in motion, leading Robin and Sarah to fight for much more than their relationship...

The title of this novel, is worth heeding. This is novel that you don't want to miss a single second of. It is utterly gripping, twisted and brilliant.

Robin and Sarah are non identical twins whose world is torn apart by their mothers affair with a friend's father. But it appears the twins are the only ones who didn't see it coming, and their father has a rather 'cosy' relationship with the very same friend's mother.

Soon the two families merge and the twins father is more or less blackmailed into letting one of them move away with their mother to the United States of America where her new parter has landed a successful job.

The twins friend, Callum and Robin are to stay in the UK with Robin's father and Callum's mother. Robin is obviously distraught that her sister is leaving, but a little bit secretly pleased that she gets Callum all to herself as a friend, and no longer has to share him with her twin.

Fast forward a decade or so, and as singer, lead guitarist and songwriter in rock band, Working Wife, Robin has it all. Until one day her life crashes down around her ears. Now Robin is agoraphobic and hasn't left her home since abandoning her band in the middle of a tour.

Sarah has the life she's always wanted, a good looking man, beautiful baby. But she can't forget the past. And if the truth be known is a little jealous of her twin sister's success.

Told from both girls' perspectives, in both the present day and through the past, its clear that all is not as it seems for either of them, both growing up and in the present day.

But just how damaged are they by the past?

And can either of them ever truly move on?

Don't Close Your Eye is available now via Amazon online and all good book shops.