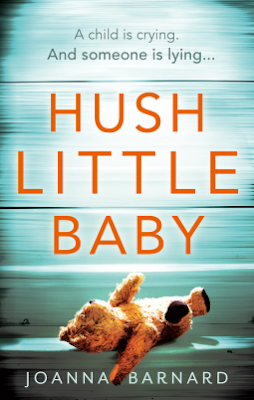 Back cover blurb: When baby Oliver breaks his arm, no-one can (or will) say how it happened. His mother is exhausted. His father is angry. His older sister is resentful. And they all have something to hide.


Hush Little Baby opens with a new mum terrified that she is going to hurt her baby.

Baby Oliver is left with Father, Richard and older Step-Sister, Martha whilst Mum, Sally goes out for the evening with her old work colleagues. It should be Sally's chance for a night off, a chance to reacquaint herself with her colleagues before contemplating work again.

It turns out to be her biggest mistake.

Sally gets hopelessly drunk, crashes out upon her return home and is only woken in the early hours of the morning by Richard shaking her, and poor baby Oliver screaming in pain. It is clear he has broken his arm, so they rush to A & E.

It is there that the real nightmare begins.

Neither Sally or Richard have any idea how Oliver came about his injuries. The authorities are quick to step in, to place Oliver away from the family, away from 'harm'. The situation as horrible as it may seem, is a perfectly feasible one.

Little ones are so precious, but so fragile, harm can easily come to them, no matter how careful we are to protect them.

I don't want to give anything more away as Hush Little Baby is a novel that you need to read to understand.

Hush Little Baby is full of unreliable narrators-just the way I like my novels! I was surprised by the ending, but can't say it was unexpected, and it finishes the novel perfectly! Highly recommended.

Hush Little Baby is available via Amazon online and all good book shops.


Thank You to the publishers who approved my request via netgalley in exchange for an honest review.