Review - Some Fantastic Place: My life in and out of Squeeze by Chris Difford 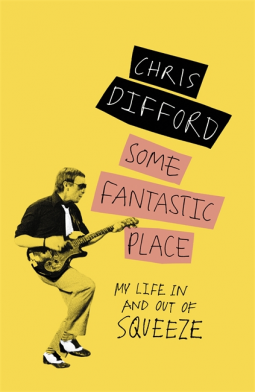 Some Fantastic Place: My life in and out of Squeeze by Chris Difford
Publisher: W & N (Orion publishing)
Release date: 31 August 2017

Rating: *****
Back cover blurb: Chris Difford is a rare breed. As a member of one of London's best-loved bands, the Squeeze co-founder has made a lasting contribution to English music with hits such as 'Cool For Cats', 'Up The Junction', 'Labelled With Love', 'Hourglass' and 'Tempted'. Even before his first release in 1977, his love of writing lyrics has never wavered. Over the course of a thirteen-album career with Squeeze, it was clear from the very beginning that Difford has few peers when it comes to smart, pithy lyricism. His 'kitchen-sink drama' style has drawn plaudits from fans on both sides of the Atlantic, and his influence is keenly felt today. The likes of Lily Allen. Mark Ronson, Kasabian, Razorlight and many more have recognized the debt they owe to Squeeze's music and to Difford's way with words, while journalists were moved by his winning combination with Glenn Tilbrook to dub the pair 'The New Lennon and McCartney'. In Some Fantastic Place, Chris Difford charts his life from his early days as a dreaming boy in south London with a talent for poetry to becoming a member of one of Britain's greatest bands and beyond. Along the way he reveals the inspiration and stories behind Squeeze's best-known songs, and his greatest highs and lows from over four decades of making music.

If I wasn’t enjoying my career quite as much as I do, the one thing I would love to be (other than a novelist) is a song-writer. One of the reasons that I love the music artists that I do, is purely down to their lyrics. I rarely like a band or artist that doesn't have what I consider to be good lyrics.

There is a line in Chris Difford’s autobiography where he's talking about early punk, that sums this up perfectly;

"I was always looking for the lyric and I felt there was no depth to it. The music felt like it was falling down the stairs".

Those not familiar with Chris, should know that not only is he the founding member of Squeeze, but also one of this country’s greatest ever lyricists, having written for Elton John, Jools Holland and Elvis Costello to name but a few.

Some Fantastic Place is the perfect title for Chris’ book. Personal to both him and Glenn, the song of the same name is one of their finest.

If you aren’t familiar with Squeeze (and/or Glenn Tillbrook and Chris Difford asolo artists) then this account of their musical history should at the very least make you curious to seek out some of their work. From their humble beginnings in local pubs to sell out shows in New York's Madison Square Gardens, Chris weaves a magical tale of life on the road.

But this isn't a book about Squeeze, it is a very personal account of Chris Difford's life from his earliest childhood memories, to finally finding happiness with his beloved wife Louise, via the highs and lows of being in a world famous band whilst battling with addiction, Some Fantastic Place is a real insight into Chris's struggles, talent and personality.

Some Fantastic Place is a fascinating insight into the life and works of one of the most talented artists that we have in Great Britain, and after reading I wanted to give Chris a hug and tell him that everything will be okay. Writing such a personal account must be hard for anyone to do, but for a former addict who has also had problems expressing how he truly feels, it is a masterful achievement.

A must read for anyone who has ever struggled with... Well life in general. This isn't a book just for music lovers, this is for everyone.

As an aside – I met Chris once after one of the pop up shop tour shows and he was so lovely! He had noticed me and my friend singing along in the front row and commented on this, much to our embarrassment!

Some Fantastic Place is available from 31 August 2017.