Review - The Walls by Hollie Overton 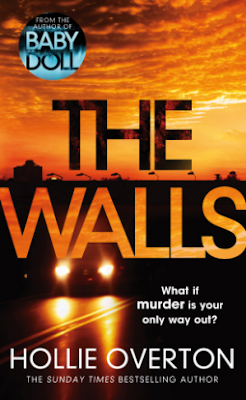 The Walls by Hollie Overton

Release date: 10 August 2017
Rating:  **** and a half
Back cover blurb: From the author of Sunday Times bestseller and Richard & Judy Book Club pick, Baby Doll, comes a riveting thriller with domestic violence, murder and how far one woman will go to protect her family at its core. What if murder was your only way out? Single mom Kristy Tucker works as a press agent for the Texas Department of Corrections handling everything on death row from inmate interviews, to chronicling the last moments during an execution. Her job exposes Kristy to the worst of humanity and it's one that's beginning to take its toll. So when Kristy meets Lance Dobson, her son's martial arts instructor, she believes she's finally found her happy ending. She’s wrong. Kristy soon discovers that Lance is a monster. Forced to endure his verbal and physical abuse, Kristy is serving her own life sentence . . . unless she's willing to take matters into her own hands. Perfectly poised to exploit the criminal justice system she knows so well, Kristy sets out to get rid of Lance - permanently.

Kristy Tucker is Public Information Officer at the Texas Department of Corrections. Liaising with the press and inmates on Texas' death row, Kristy's job is emotionally draining. Her teenage son, Ryan wants her to quit, he worries for his mom's health, and if he's honest, her life.

Living with her Father 'Pops' after her own Mothers untimely death, the three of them enjoy their lives. Kristy believes that she's doing a good job of bringing up Ryan as a single Mom, until the day that Kristy is called into the principals office and Ryan is suspended for fighting.

When Kristy learns that Ryan has been seeing a martial arts tutor without her knowledge she is furious. Her son has always been against violence, so what has changed?

Ryan's martial arts instructor Lance Dobson goes out of his way to help Kristy understand that Judo isn't about violence, it's about self defence and its true meaning from the Japanese is 'Gentle Way'. Something that both Kristy and Ryan are more familiar with.

Having won her over in respect of Ryan, Lance Dobson's next task is to steal Kristy's heart. And although wary at first, she realises that she is ready for love, ready to be loved, by a man who promises her the world. The only thing is, once they are married that world is very different to the one that they inhabited before.

Kristy quickly realises that Lance is a monstrous, manipulative domestic abuser of the very worst kind, the kind that women murder when they see no other escape. When their families have been threatened and they have nowhere to turn. But Kristy isn't a murderer. Is she?

I must admit that I found it hard to believe that Kristy would even contemplate hurting, let alone murdering her husband. However, I do applaud this novel for highlighting that that is exactly what can happen when people are pushed to their limits. Particularly in domestic violence cases.

The Walls is a fascinating insight into the world of death row inmates and domestic violence, family loyalty and how work can consume our lives until something forces that to change. Whether that be good or bad... I look forward to Hollie Overton's next!


The Walls is available now via Amazon online and all good book shops.
Thank You to the publishers who invited me to view this title via netgalley in exchange for an honest review.