Review - Bring Me Back by B.A. Paris 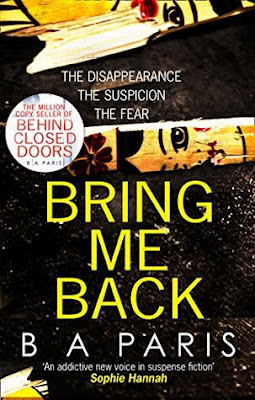 Back cover blurb: A young British couple are driving through France on holiday when they stop for gas. He runs in to pay, she stays in the car. When he returns her car door has been left open, but she's not inside. No one ever sees her again. Ten years later he's engaged to be married; he's happy, and his past is only a tiny part his life now. Until he comes home from work and finds his new wife-to-be is sitting on their sofa. She's turning something over in her fingers, holding it up to the light. Something that would have no worth to anyone else, something only he and she would know about because his wife is the sister of his missing first love. As more and more questions are raised, their marriage becomes strained. Has his first love somehow come back to him after all this time? Or is the person who took her playing games with his mind?

This is the third B.A. Paris novel that I’ve read, and I’m mightily impressed as they have all been completely different, which sadly you don’t always get with writers in this genre.

Finn is devastated when his girlfriend Layla disappears from a service station in France that they’d stopped to refuel at.

Ellen is Layla’s elder sister, the more sensible, more caring of the two and Finn just couldn’t help but fall for her. Even though still deep down his loyalty and love still resides with Layla.

Ellen is horrified when she finds something that would have no meaning to anyone but her, Layla and Finn. Then she spots Layla in a nearby town and Finn must question everything her knows about the past ten years.

He’d always assumed that something bad had happened to Layla due to the circumstances surrounding her disappearance. He didn’t quite tell the Police the whole truth about that night and now he must decide if he needs to involve the police or not to help find Layla, if it really is her trying to contact Ellen and Finn.

The possibility that Layla could be alive and nearby puts a huge strain on Ellen and Finns relationship. Ellen has been convinced for years that her sister must be dead, and Finn knows that she could be right, but not for the reasons Ellen thinks.

Both Finn and Ellen have their secrets, which neither of them are prepared to reveal to the other, or the reader until the very last pages of the novel. It’s conclusion is both shocking and brilliant in equal measure.

Bring Me Back is a twisty rollercoaster of a novel that will definitely make you lose sleep until you’ve finished it!

Bring Me Back is available from 8 March 2018.
You can pre-order it now via Amazon online and all good book shops.

Thank You to lovereading.co.uk and the publishers who sent me an advanced copy of this novel in exchange for an honest review.