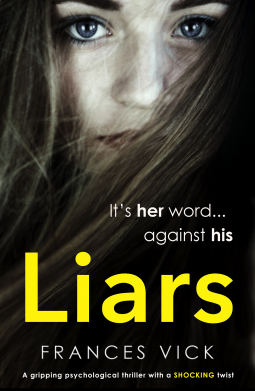 Back cover blurb: He loves you. He’d do anything for you. But you don’t even know him. Jenny hasn’t had an easy life – no job and no money, with a sick mother and an abusive ex-stepfather. Not that anybody cares, she’s from the wrong side of town. David has taken care of Jenny ever since they were at school together. He knows how special she is, how much she needs his support. David has a lot of love to give. Jenny and David aren’t in a relationship. They aren’t even friends. Jenny thinks she’s free to do what she wants, see who she likes. What does David think? Well, you’ll have to find out.


Jenny Holloway has had a troubled life.

Her Mother is a heavy drinker, who manages to escape a violent partner but not before he had abused her daughter. Jenny is now seeing a therapist but her life is about to get a whole lot more complicated.

Away from home for one night staying at her best friend Freddie’s house, Jenny is shocked to learn about the death of her Mother who has taken a fall in the snow and become fatally wounded.

Jenny is frightened when questioned by the Police. Why is she a suspect?

Freddie assures her it is normal procedure and Jenny relaxes.

When an old school friend appears looking for love, Freddie is jealous of the bond between him and Jenny and suspicious of David and his behaviour.

Freddie’s jealousy makes Jenny want to have nothing more to do with Freddie. But he is one of her oldest and truest male friends. Is there anything in the accusations he is making?

Or should Jenny just ignore him and give David the true relationship he’s always wanted from her?


Liars is available from 26 January 2018.
You can pre-order it now via Amazon online and all good book shops.