Review - Come and Find Me by Sarah Hilary 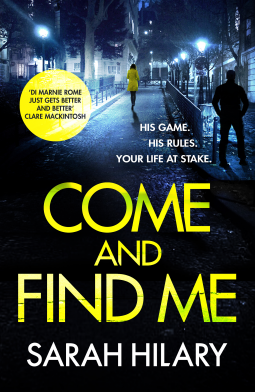 Come and Find Me by Sarah Hilary
Publisher: HeadlineRelease date: 22 March 2018Back cover blurb: On the surface, Lara Chorley and Ruth Hull have nothing in common, other than their infatuation with Michael Vokey. Each is writing to a sadistic inmate, sharing her secrets, whispering her worst fears, craving his attention. DI Marnie Rome understands obsession. She's finding it hard to give up her own addiction to a dangerous man: her foster brother, Stephen Keele. She wasn't able to save her parents from Stephen. She lives with that guilt every day. As the hunt for Vokey gathers pace, Marnie fears one of the women may have found him - and is about to pay the ultimate price.

So here we are on Rome and Jake book number 5, yes 5! How did that happen? Well, I'm not sure, but one thing that is for sure, is that Sarah Hilary has written another cracker of a novel.

Detectives Marnie Rome and her colleague Noah Jake are once again thrown into an investigation that no copper in their right minds would want to be part of. This time its the case of escaped prisoner Michael Vokey.

Lara Chorley and Ruth Hull don't see him that way though. Neither is aware of the others existence, but both are lonely women writing to Vokey as an inmate of HMP Cloverton before his escape. Which consequently makes them very interesting to Rome and Jake.

Because even with prison riots at the forefront of the national news, it seems implausible that a prisoner such as Vokey could have escaped a jail like Cloverton. He must have had help. Could even have someone hiding him...

These thoughts are disturbing, but must be tackled to help Rome and Jake to find their man. Even if he very much doesn't want to be found.

As I think is usual for one of Sarah Hilary's novels, there isn't too much more I can say without spoiling it for others. Just to say that there is a very unique darkness to this novel which sets the scene beautifully for some very unsavoury characters. It is intense and gripping, and may just be my favourite in the series yet.

Come and Find Me is available from 22 March 2018.
You can pre-order it now via Amazon online and all good book shops.