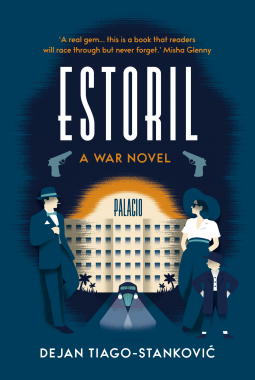 Back cover blurb: Set in a luxurious grand hotel just outside Lisbon, at the height of the Second World War, Estoril is a delightful and poignant novel about exile, divided loyalties, fear and survival. The hotel's guests include spies, fallen kings, refugees from the Balkans, Nazis, American diplomats and stateless Jews. The Portuguese secret police broodingly observe the visitors, terrified that their country's neutrality will be compromised. The novel seamlessly fuses the stories of its invented characters with appearances by historical figures like the ex-King Carol of Romania, the great Polish pianist Jan Paderewski, the British agent Ian Fleming, the Russian chess grandmaster Alexander Alekhine and the French writer and flyer Antoine de St Exupery, who forms a poignant friendship with a young Jewish boy living alone in the hotel.


Estoril is described as a “war novel” but it so much more than that.

Estoril is quite an unusual novel in the way that it’s written. Although most definitely historical fiction at times it reads like a spy thriller.

It reads also quite simply, however it is a complex novel with many hidden layers and should not be underestimated.

Portugal is the home of Estoril, the name of the town rather then the hotel. During World War Two the town was a hotbed of espionage activity, as well as a hiding place for many war refugees.

The hotel Palacio houses an exotic mixture of all of these and more. Mr Black, hotel manager has the ultimate responsibility for the guests and their safety. And what a responsibility that is!

Estoril houses a curious blend of fictional and real historical figures, all with one common goal. For the war to be over as quickly as possible and lives to ge back to normal.

Estoril is difficult to describe further without giving anything away. It is a great novel and an interesting read.

Estoril is Amazon now via online and all good book shops.