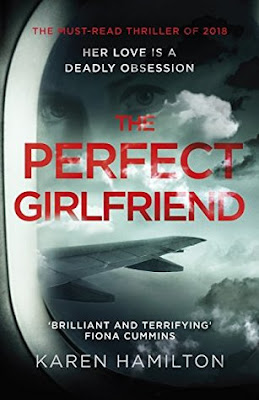 The Perfect Girlfriend by Karen Hamilton

Publisher: Wildfire
Release date: 22 March 2018
Back cover blurb: Juliette loves Nate. She will follow him anywhere. She’s even become a flight attendant for his airline, so she can keep a closer eye on him. They are meant to be. The fact that Nate broke up with her six months ago means nothing. Because Juliette has a plan to win him back. She is the perfect girlfriend. And she’ll make sure no one stops her from getting exactly what she wants. True love hurts, but Juliette knows it’s worth all the pain…

Juliette loves Nate, but she realises that she may have been a bit too full on when they split up. She concedes that she needs to be the perfect girlfriend to make Nate see the error of his ways and entice him back into her life.

Juliette has a plan to get her man back. And once she does, she’s never letting him go again.

Nate is a successful pilot for a successful commercial airline. Naturally, Juliette decides that the quickest way to Nate’s heart is a job at the same airline, as cabin crew. Juliette learns the ropes quickly and is put up for promotion, allowing her to ease her way back into Nate’s life sooner rather than later.

Nate, unaware even that Juliette wants him back, is shocked when he discovers that she has been working at the same airline as him for quite some time. He is even more shocked when he learns of the depth in her adoration of him.

Juliette not least in her actions, should be thoroughly dislikable but there will be moments in this novel when you’ll be rooting for her. Nate isn’t as clueless as Juliette would have you believe, but then, Juliette is capable of so much that it’s just hard for anyone to believe...

I should have hated her, but she was too compelling. I think by the end of the novel I was actually as obsessed with her as she was with Nate.

Without giving anything away. The Perfect Girlfriend is, quite simply, a perfect debut.

The Perfect Girlfriend is available from 22 March 2018.
You can pre-order it now via Amazon online and all good book shops.

Thank You to the publishers who sent me an advanced proof copy of this novel in exchange for an honest review.