Review - Guess Who by Chris McGeorge 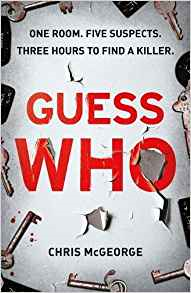 Guess Who by Chris McGeorge
Publisher: Orion
Release date: 3 May 2018

Back cover blurb: GUESS WHO. A waitress. A cleaner. An actress. A lawyer. A student. Everyone is a suspect. WHERE. In a locked room - with no escape, and no idea how they got there. WHAT. In the bathtub, the body of a man they all knew. Someone murdered him. Someone in this room. WHY. They have three hours to find out. Or they all die. THE RULES ARE SIMPLE. THE GAME IS NOT. Imagine Agatha Christie had created an interactive Escape the Room game, and GUESS WHO would be the result.

Guess Who is an interesting debut. Think Saw, crossed with an escape room, crossed with some random completely unbelievable reality tv show.

Five people find themselves locked in a hotel room with no means of escape. As well as each other for company, they have old man’s dead body. A man known to each of them in different ways, brutally murdered.

Morgan Sheppard, drug addict, alcoholic and morning television’s detective answer to Jeremy Kyle seems to be the reason that they are all in the room together. But they don’t know him.

When they are contacted by someone outside of the room, it is Morgan that is put in charge.

He has three hours to find the murderer who is amongst them somewhere in the room, before the hotel and the rest of its guests, besides Morgan and his companions are blown to pieces.

There’s no denying that Morgan has upset people over the years, made few friends and a huge amount of enemies, but what exactly can he have done to cause such an extreme reaction?

Who on earth would want him and a bunch of people he doesn’t even know to suffer?

To find the answer Morgan has to delve into his own past, but after years of denial, alcohol and substance abuse, his mind refuses to cooperate.

Will he be able to discover the killers identity before it’s too late? Or will this be a guessing game too far?

Guess Who is available from 3 May 2018.
You can pre-order it now via Amazon online and all good book shops.