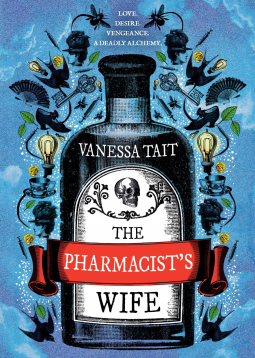 Back cover blurb: Love. Desire. Vengeance. A deadly alchemy. When Rebecca Palmer's new husband opens a pharmacy in Victorian Edinburgh, she expects to live the life of a well-heeled gentlewoman. But her ideal is turns to ashes when she discovers her husband is not what he seems. As Rebecca struggles to maintain her dignity in the face of his infidelity and strange sexual desires, Alexander tries to pacify her so-called hysteria with a magical new chemical creation. A wonder-drug he calls heroin. Rebecca's journey into addiction takes her further into her past, and her first, lost love, while Alexander looks on, curiously observing his wife's descent. Meanwhile, Alexander's desire to profit from his invention leads him down a dangerous path that blurs science, passion, and death. He soon discovers that even the most promising experiments can have unforeseen and deadly consequences... Reminiscent of the works of Sarah Waters, this is a brilliantly observed piece of Victoriana which deals with the disempowerment of women, addiction, desire, sexual obsession and vengeance.

Rebecca Palmer is one of my favourite characters in historical fiction in a long time.

Recently married to pioneering pharmacist Alexander Palmer, she is a strong woman, in a world where women are not supposed to be, and most certainly not allowed to be strong.

Rebecca isn't much suited to married life, at least not married life with Alexander, whom she soon finds out has a vicious temper, a penchant for extra marital activities and some downright odd sexual fetishes and desires.

Rebecca suspects her husbands infidelity early into the marriage, but when she considers confronting him about it, she merely hints at her suspicions and her husband accuses her of hysteria.

Yet this is exactly what he wanted. For Alexander believes he has discovered a wonder drug to keep women subdued during their married lives. Heroin. At first Rebecca enjoys the sensations that the drug brings.

But before she realises what has happened she is addicted and her husband is insistent she keeps taking the drug as he is actually experimenting on his wife, alongside several other women.

Thankfully Rebecca is much smarter than her husband gives her credit for. She realises that she must get away from him when she realises the extent of his deceit. What she doesn’t take into consideration is just how hard it can be for a woman to make her mark in the world without her husband behind her...

The Pharmacists's Wife is available now via Amazon online and all good book shops.