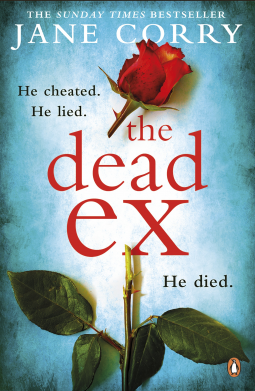 Back cover blurb: The third TWIST-FILLED novel from the TOP TEN BESTSELLING author of My Husband's Wife and Blood Sisters. HE CHEATED. HE LIED. HE DIED. Vicki's husband David once promised to love her in sickness and in health. But after a brutal attack left her suffering with epilepsy, he ran away with his mistress. So when Vicki gets a call one day to say that he's missing, her first thought is 'good riddance'. But then the police find evidence suggesting that David is dead. And they think Vicki had something to do with it. What really happened on the night of David’s disappearance? And how can Vicki prove her innocence, when she's not even sure of it herself?


Jane Corry's previous novels have both been absoulute crackers and 'the Dead Ex' is no exception. Infact I think it may be my favourite so far!

Vicki, Scarlet and Helen (who we meet slightly later) are our three narrators, each of their lives linked somehow, but this doesn’t become clear until much nearer to the novel's conclusion.

Vicki is an aromatherapist with her own business, living a solitary but successful life in Cornwall after splitting from her husband David. The separation wasn’t her decision, and David has since remarried his P.A.; Tanya, with whom he was having an affair whilst married to Vicki.

When David goes missing, Vicki is one of the first people that the police question. Their suspicions ramp up as David is presumed dead. But Vicki needs to find out what’s happened to David, despite her lawyers advice to not go meddling, and instead keep her distance and prove her innocence.

Scarlet is an 8 year old girl, caught in a dangerous “game” with her Mother. This comes to an end when her Mother is sent to prison. Scarlet is bundled from one foster home to another with no knowledge of her Mother’s actions, until she discovers the truth and it changes her life forever.

Helen is perhaps the most intriguing of our characters. We are told little about her, though some very subtle clues are dropped. When she starts working for David, it’s clear she has an ulterior motive, but we don’t know what.

Three separate lives that will be keep you gripped as you struggle to work out their connection.

Three separate lives that are all changed forever by different events.

I can’t say too much more without giving anything away, but The Dead Ex is a very clever novel and I can’t wait for Jane Corry’s next!
The Dead Ex is available now via Amazon online and all good book shops.
Thank You to the publishers who approved my request via netgalley in exchange for an honest review.