Review - How hard can it be? by Allison Pearson 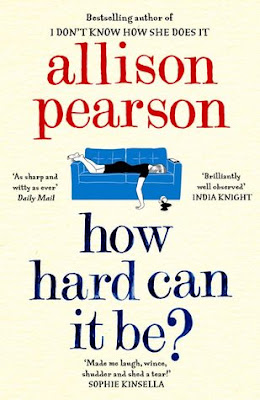 How hard can it be? by Allison Pearson
Publisher: The Borough Press
Release date: 28 June 2018
Back cover blub: Kate Reddy is counting down the days until she is fifty, but not in a good way. Fifty, in Kate’s mind, equals invisibility. And with hormones that have her in shackles, teenage children who need her there but won’t talk to her and ailing parents who aren’t coping, Kate is in the middle of a sandwich that she isn’t even allowed to eat because of the calories. She’s back at work after a big break at home, because somebody has to bring home the bacon now that her husband Rich has dropped out of the rat race to master the art of mindfulness. But just as Kate is finding a few tricks to get by in her new workplace, her old client and flame Jack reappears complicated doesn’t even begin to cover it. How Hard Can It Be? is a coming of age story for turning fifty. It’s about so much more than a balancing act; it’s about finding out who you are and what you need to feel alive when you’ve got used to being your own last priority. And every page will leave you feeling that there’s a bit of Kate Reddy in all of us.


So I feel the need for a quick disclaimer first. I am nowhere near Fifty (I am infact Thirty-Five) but I identify so easily with Kate Reddy and her chaotic life.

We meet Kate in a middle of the night crisis, her teenager daughter trying to frantically get her Mother's attention without waking her Father. The disaster is a 'Belfie' that has gone viral. If you are cool and down with the kids (which I am clearly not) then you will know what a Belfie is.

I am clearly no longer in touch with the digital world...

A belfie, is a version of a Selfie I suppose, but a picture of one's own bottom, rather than their face. I know right? Who knew such a thing existed? I digress. This middle of the night disturbance basically sums up Kate's chaotic life, as she struggles to cope with two teenagers, a husband clearly having a mid-life crisis and her own desire to get back to work.

But who would want to employ a near fifty year old?

In desperation Kate turns to her old employer. She applies for a position, knowing that she has lied about her age on the application, she is nervous, but knows that she can do the job, and its not as if anyone who worked there previously is still hanging around, who might know her real age... is it?

Kate's life may be chaotic, but it's about to get a whole lot worse.

How hard can it be? is a delightful warmhearted novel, and I hope to hear more about Kate Reddy.

How hard can it be is available now via Amazon online and all good book shops.

Thank You to the publishers and lovereading.co.uk who sent me an advanced copy of this novel in exchange for an honest review.