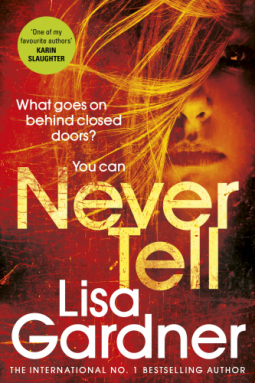 Never Tell by Lisa Gardner
Publisher: Century
Release date: 21 February 2019
Back cover blurb: One death might be an accident. Two deaths looks like murder. A man is shot dead in his own home, and his pregnant wife, Evie, is found with the gun in her hands. Detective D.D. Warren instantly recognises her. Sixteen years ago, Evie also shot her own father. That killing was ruled an accident. D.D. doesn’t believe in coincidences. But this case isn’t as open and shut as it first appears, and her job is to discover the truth. Evie might be a victim. Or she might be about to get away with murder again.

So, I haven’t read any of Lisa Gardner’s books before, but although this is number 10 in a series, it is easily read as a stand alone. And I will in fact be reading more of Lisa's work in the future.

This novel begins, when Conrad Carter is found shot dead in his own home. His pregnant wife, Evie is the immediate and only suspect.

Detective D.D. Warren has met Evie Carter before, back when she was just Sixteen years old and suspected of the murder of her Father, a renowned Professor and Mathematician, also shot dead, in almost identical circumstances.

Evie is adamant that she never committed either crime, but D.D. Warren doesn't believe in coincidences.

How could an innocent person find themselves in almost identical situations decades apart?

D.D.'s job is to discover the truth, no matter how disturbing that may be.

I can't say much more. But there were many people that I suspected of this crime, including Evie, but I never saw the ending of this novel coming, and I read a lot of crime fiction!

Never Tell is available now via Amazon online and all good book shops.