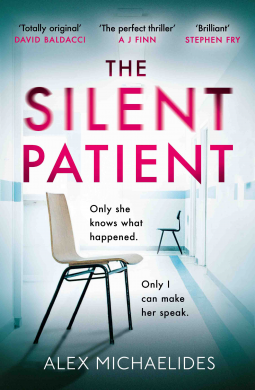 Back cover blurb: Alicia Berenson’s life is seemingly perfect. A famous painter married to an in-demand fashion photographer, she lives in a grand house with big windows overlooking a park in one of London’s most desirable areas. One evening her husband Gabriel returns home late from a fashion shoot, and Alicia shoots him five times in the face, and then never speaks another word. Alicia’s refusal to talk, or give any kind of explanation, turns a domestic tragedy into something far grander, a mystery that captures the public imagination and casts Alicia into notoriety. The price of her art skyrockets, and she, the silent patient, is hidden away from the tabloids and spotlight at the Grove, a secure forensic unit in North London. Theo Faber is a criminal psychotherapist who has waited a long time for the opportunity to work with Alicia. His determination to get her to talk and unravel the mystery of why she shot her husband takes him down a twisting path into his own motivations—a search for the truth that threatens to consume him....

The book world has have been taking about this book for months, and rightly so. It is an incredible debut, gripping you from the start and not letting go until that ending.

'The Silent Patient' allows us to follow forensic psychotherapist Theo Faber, through his journey with the notorious Alicia Berenson.

Alicia was a successful artist who hit the headlines when she was found alone with her murdered husband Gabriel. Gabriel was shot in the face five times, and Alicia's were the only prints on the gun. She has never admitted her guilt, nor has she protested her innocence.

She has been mute since the day of the murder.

Six years on and Alicia is a patient at a closed psychiatric unit called The Grove, the hospital setting is perfect for the atmosphere of this novel, and their treatment of Alicia before Theo's arrival is exactly as you might expect.

Theo who has been fascinated with Alicia's case since the start, applies for a role at the Grove and is successful. He believes that he can make Alicia speak again, his colleagues are unconvinced and think Alicia is a lost cause. He is determined to get her off some of the heavier medication that she is on and move forward.

Theo's almost obsessive interest in Alicia seems in part, to be due to similarities with his own childhood and the trials and tribulations that they had to overcome to be successful.  But there is also an obsession with the case, why is Alicia mute? There must be an underlying reason...

I literally cannot say anything else (I'm keeping the silence about that ending!) but I can honestly say that I was completely shocked by it (I read so many novels that it's hard to shock me these days, I genuinely gasped out loud!).

Absolutely brilliant, can't recommend it highly enough. I know it's still early, but this is definitely one of the books of 2019.


The Silent Patient is available now via Amazon online and all good book shops.

Thank You to the publishers who sent me an advanced copy of this novel in exchange for an honest review.
Newer Post Older Post Home