Review - A dangerous act of kindness by LP Fergusson 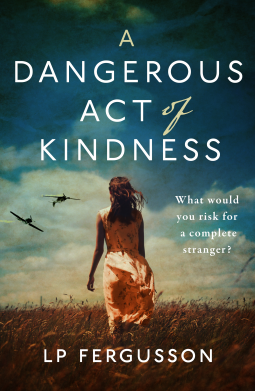 Back cover blurb: What would you risk for a complete stranger? When widow Milly Sanger finds injured enemy pilot Lukas Schiller on her farm, the distant war is suddenly at her doorstep. Compassionate Milly knows he’ll be killed if discovered, and makes the dangerous decision to offer him shelter from the storm. On opposite sides of the inescapable conflict, the two strangers forge an unexpected and passionate bond. But as the snow thaws, the relentless fury of World War Two forces them apart, leaving only the haunting memories of what they shared, and an understanding that their secret must never see light. As Milly’s dangerous act of kindness sets them on paths they never could have expected, those closest to them become their greatest threats, and the consequences of compassion prove deadly… A Dangerous Act of Kindness is a beautiful, harrowing love story, perfect for fans of Rachel Hore and Santa Montefiore.


Milly Sanger is young, widowed, brave. At least that's what those around her, tell her. Deep down she harbours guilt and resentment for her husband's suicide.

When injured enemy pilot, Lukas Schiller is found by her dog Gyp in one her barns, Milly's first instinct is not to turn him over to the authorities, or even the loacals who would surely kill him. But instead she needs to help him. His shoulder is badly disclocated and if he stands any chance of further survival it must be fixed.

The snow has already begun to fall when the pair begin to make their way back to the farmhouse to see if they can fix Lukas’ shoulder before the injury becomes even worse. When Hugh comes to visit, Milly must hide Lukas and realises how dangerous it could be to help him. Though it destroys her to see him in so much pain.

Hugh, Milly's neighbour and lifelong friend is suspicious of Milly’s behaviour during the snow storm, doesn’t understand why she is suddenly unwelcoming of his open affection towards her. Of course Milly doesn’t think of Hugh romantically. In fact she is barely thinking of him at all...

Why would she when she has Lukas?

But where are these thoughts and feelings coming from? He is the enemy ... but to Milly he is another vulnerable casualty of war. An undeniable attraction lies between them. But Milly know that Hugh nor anyone else must ever discover Lukas, and as Hugh is forced to stay at the farm because of the weather, Milly realises that Lukas must leave as soon as the cost is clear for him to do so.

When Lukas leaves, Milly feels as if her heart has been ripped in two but she knows they will never see each other again. Her actions though will remain with her for the rest of her life, that is, if she can even live that life under the deepest suspicions.

A Dangerous Act of Kindness is a beautiful novel, and one that will stay with me for a long time.

A dangerous act of kindness is available from 28 March 2019.
You can pre-order it now via Amazon online and all good book shops.