Review - The Huntress by Kate Quinn 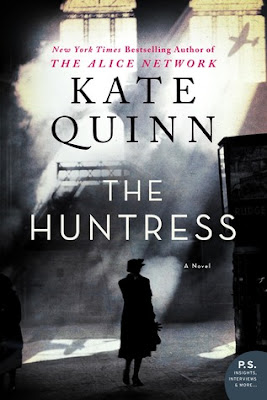 The Huntress by Kate Quinn
Publisher: Harper Collins UK
Release date: 18 April 2019
Back cover blurb: On the icy edge of Soviet Russia, bold and reckless Nina Markova joins the infamous Night Witches – an all-female bomber regiment. But when she is downed behind enemy lines, Nina must use all her wits to survive her encounter with a lethal Nazi murderess known as the Huntress. British war correspondent Ian Graham abandons journalism to become a Nazi hunter, yet one target eludes him: the Huntress. And Nina Markova is the only witness to escape her alive. In post-war Boston, seventeen-year-old Jordan McBride is increasingly disquieted by the soft-spoken German widow who becomes her new stepmother. Delving into her past, Jordan slowly realizes that a Nazi killer may be hiding in plain sight. Shining a light on a shadowy corner of history, The Huntress is an epic, sweeping Second World War novel from the New York Times bestselling author of The Alice Network.

The Huntress is possibly my favourite historical fiction novel of 2019. It is a beautifully written, well researched novel that blends some historical fact with fiction and links the unlikeliest of characters together.

In the aftermath of WWII, in the US, Jordan McBride is an aspiring photographer, wishing her widowed Father would find love again so that he wasn't so lonely. Her wishes are granted when he brings home a beautiful german woman, who is also a widow.

Across the ocean in Europe, Ian Graham, former British War correspondant is now a Nazi hunter, determined to bring those to justice who have so far evaded capture. He and his partner Tony and doing important work, and every Nazi bought to trial is a victory, but one continuously disturbs Ian, as she was responsible for the death of his brother among others.

The female in question is 'Die Jagerin', a cold blooded killer, responsible for some truly atrocious crimes, even by Nazi standards. She has left little or not trace of her whereabouts, and Ian is desperate to see her caught and bought to justice, and not just for his family, but for all those who have suffered at her hands.

Nina Markova is a former member of the Night Witches, an all female night bomber unit. She is one of the few left alive who can identify Die Jagerin, as she survived an encounter with her. As determined as Ian to bring her to justice, she begins working with them in the hope that together they will find her.

After many false leads they end up in the USA. Uncertain if they will find what they are looking for, they go about their daily work and are led to Jordan's Fathers Antiques shop, where an old man is working, believed to be forging documents.

They know he is not the person that the are after, but another Nazi criminal off the streets is another victory for the team. And their final victory may be closer than they think...


The Huntress is available now via Amazon online and all good book shops.
Thank You to the publishers who approved my request in exchange for an honest review.