Review - The Confession by Jessie Burton 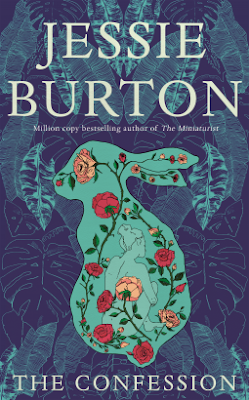 The Confession by Jessie Burton
Publisher: Picador
Release date: 19 September 2019
Back cover blurb: The sensational new novel from the million-copy bestselling author of The Miniaturist and The Muse. One winter's afternoon on Hampstead Heath in 1980, Elise Morceau meets Constance Holden and quickly falls under her spell. Connie is bold and alluring, a successful writer whose novel is being turned into a major Hollywood film. Elise follows Connie to LA, a city of strange dreams and swimming pools and late-night gatherings of glamorous people. But whilst Connie thrives on the heat and electricity of this new world where everyone is reaching for the stars and no one is telling the truth, Elise finds herself floundering. When she overhears a conversation at a party that turns everything on its head, Elise makes an impulsive decision that will change her life forever. Three decades later, Rose Simmons is seeking answers about her mother, who disappeared when she was a baby. Having learned that the last person to see her was Constance Holden, a reclusive novelist who withdrew from public life at the peak of her fame, Rose is drawn to the door of Connie's imposing house in search of a confession . . . From the million-copy bestselling author of The Miniaturist and The Muse, this is a luminous, powerful and deeply moving novel about secrets and storytelling, motherhood and friendship, and how we lose and find ourselves.

The Confession is another beautifully written novel by Jessie Burton. It centres on the lives of three very different women, Elise, Constance and Rose.and spans two timelines; the 1980's and the present day.

1980's London; a chance meeting with novelist Constance (Connie) Holden leads Elise Morceau into a thrilling world of authors, publishers, film studios and the Hollywood elite. Elise although happy at being in LA with Connie, starts to feel out of her depth, she is constantly reassured by Connie, until one night an overheard conversation changes everything.

In the present day Rose is visiting her Father, when everything changes.

Rose's Mother, Elise left when Elise was a baby. Seemingly disappearing without a trace. It is something that her family don't talk about and she has always been reasonably happy with her lot. Until her Father mentions Elise out of the blue, and Rose decides she must know the truth.

When she learns that Constance Holden was the last person to see Elise, Rose decides that she must meet her and attempt to uncover the truth surrounding her Mother's disappearance.

What starts out as a simple plan, quickly becomes a tangled web of secrets and lies, and Rose must tread carefully if she is to learn anything at all. Although they do not know each other Elise and Rose are very similar, and I think it would have been interesting to explore their relationship further.

Maybe a sequel could be on the cards, I would love to know what the future holds for these characters...

The Confession is available now via Amazon online and all good book shops.